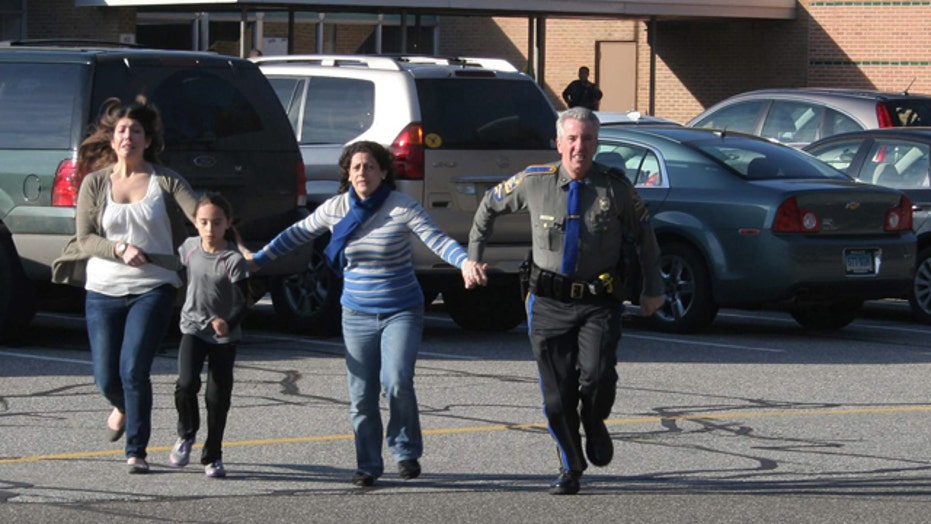 HARTFORD, Conn. – Recordings released Wednesday of 911 calls from the Sandy Hook Elementary School shooting show town dispatchers urged panicked callers to take cover, mobilized help and asked about the welfare of the children as the boom of gunfire could be heard at times in the background.

One caller told police in a trembling, breathless voice that a gunman was shooting inside the building.

"I caught a glimpse of somebody. They're running down the hallway. Oh, they're still running and still shooting. Sandy Hook school, please," the woman said.

In the minutes that followed, staff members inside the school pleaded for help as Newtown police juggled the barrage of calls.

The calls were posted on the town's website under a court order after a lengthy effort by The Associated Press to have them released for review.

An unidentified teacher called from a classroom to the left of the front entrance to report what sounded like gunshots in the hall. She said she was in the room with all her students and hadn't yet locked the door.

Another woman, who was shot in the foot, reported that she was in a classroom with children and two other adults, but that there was no way to safely lock the door. The dispatcher told her to apply pressure to the wound.One of the first calls came from a custodian, Rick Thorne, who said that a window at the front of the school was shattered and that he kept hearing shooting. While on the line with Thorne, the dispatcher told somebody off the call: "Get everyone you can going down there."

Thorne remained on the phone for several minutes.

"There's still shooting going on, please!" the custodian pleaded to a Newtown 911 dispatcher as six or seven shots could be heard in the background. "Still, it's still going on!"

The gunman, 20-year-old Adam Lanza, shot his way into the school the morning of Dec. 14 and killed 20 children and six educators with a semi-automatic rifle. He also killed his mother in their Newtown home before driving to the school.

Newtown police officers arrived at the school within four minutes of the first 911 call, but nearly six minutes passed before they entered the building as they sorted out concerns over a possible second shooter, according to a prosecutor's report issued last week.

It's not clear whether the delay made a difference because Lanza killed himself one minute after the first officer arrived on the scene, according to the report.

In one of the recordings released Wednesday, dispatchers were heard making calls to Connecticut state police that apparently rang unanswered. One of the three unanswered calls rang for at least 50 seconds. State police picked up on a fourth call.

But state police had already been dispatched to the school by the time those calls were made, according to a timeline and call log supplied by Newtown officials.

In all, seven recordings of landline calls from inside the school to Newtown police were posted Wednesday. Calls that were routed to state police are the subject of a separate, pending freedom of information request by the AP.

Prosecutors opposed the tapes' release, arguing among other things that the recordings could cause the victims' families more anguish.

"We all understand why some people have strong feelings about the release of these tapes. This was a horrible crime," said Kathleen Carroll, AP executive editor and senior vice president. "It's important to remember, though, that 911 tapes, like other police documents, are public records. Reviewing them is a part of normal newsgathering in a responsible news organization."

As the town prepared to release the recordings, the superintendent of Newtown schools, John Reed, advised parents to consider limiting their families' exposure to the media.

On the day of the shooting, the AP requested 911 calls and police reports, as it and other news organizations routinely do in their newsgathering.

Newtown's police department effectively ignored the AP's request for months until the news cooperative appealed to the state's Freedom of Information Commission, which said in September that the recordings should be released.

The prosecutor in charge of the Newtown investigation, State's Attorney Stephen Sedensky III, had argued that releasing the tapes could cause pain for the victims' families, hurt the investigation, subject witnesses to harassment and violate the rights of survivors who deserve special protection as victims of child abuse.

A state judge dismissed those arguments last week and ordered the tapes be released Wednesday unless the state appealed.

"Release of the audio recordings will also allow the public to consider and weigh what improvements, if any, should be made to law enforcement's response to such incidents," Superior Court Judge Eliot Prescott said.

"Delaying the release of the audio recordings, particularly where the legal justification to keep them confidential is lacking, only serves to fuel speculation about and undermine confidence in our law enforcement officials."