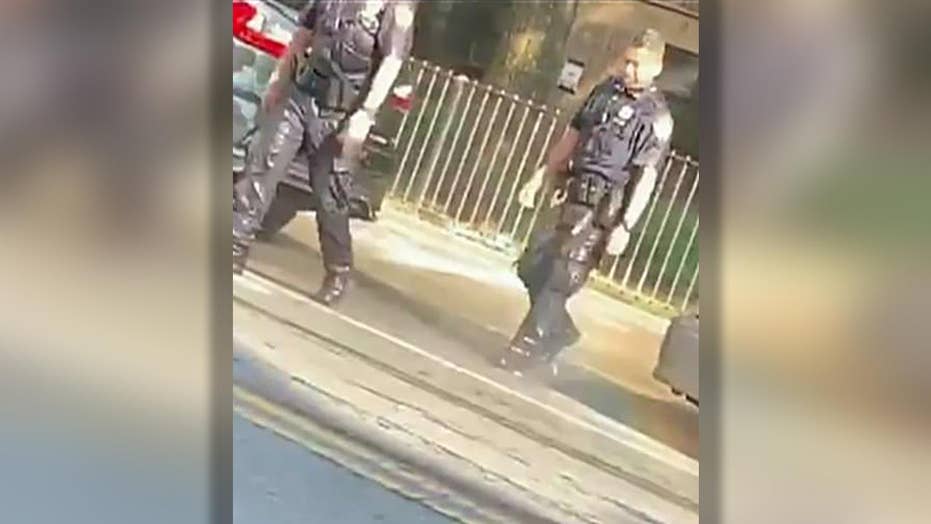 Outrage after NYPD officers are drenched with water while on duty

A 'Fox &amp; Friends' law enforcement panel reacts to the treatment of police officers in America.

Videos of New York Police Department officers being doused with water and pelted with objects in separate incidents surfaced on social media on Monday, including one clip that showed officers getting drenched as they were making an arrest.

In one video, somebody hurled a bucket that hit an officer in the head while he was making an arrest in Harlem. Groups of jeering bystanders could be heard reacting as people continued to splash the officers with water.

“The videos of cops being doused with water and having objects hurled at them as they made an arrest in #Harlem is reprehensible,” NYPD Chief Terence Monahan said in a tweet on Monday.

“NYC’s cops & communities have made remarkable progress — together — but EVERY New Yorker MUST show respect for our cops. They deserve nothing less.”

In a later tweet, Monahan wrote, “To NY’s Finest: the work you do every day is remarkable. We trust you to do what is a very difficult job.”

He encouraged officers to use their discretion and make arrests when necessary.

“Thank you for what you do day in and day out,” Monahan wrote. “Please stay safe.”

In another viral video uniformed NYPD officers were seen getting drenched as they walked on a Brooklyn street. One man approached the officer and poured a bucket of water directly over his head. The officers stayed calm and seemed to ignore the situation.

New York City Mayor Bill de Blasio reacted to one of the videos on Monday calling it “completely unacceptable.”

The 2020 presidential hopeful, a Democrat, tweeted, “A video from the 28 Precinct [Harlem] shows people interfering in an arrest by throwing water and objects at officers.”

“The NYPD kept New Yorkers safe through the heatwave and last night's outages. We won't tolerate this kind of disrespect,” he continued, adding that the NYPD was investigating.

The Police Benevolent Association (PBA) of the City of New York released a statement on the “'Water Bucket' Attacks on Police Officers” putting the blame on lawmakers.

He added that the “attacks” were “the end result of the torrent of bad policies and anti-police rhetoric that has been streaming out of City Hall and Albany for years now.”

Lynch said, “We are approaching the point of no return.”

He went on to say that “disorder controls the streets” and “elected leaders refuse to allow us to take them back.”

“The politicians may not care about the dangerous levels of chaos in our neighborhoods, but police officers and decent New Yorkers should not be forced to suffer.”