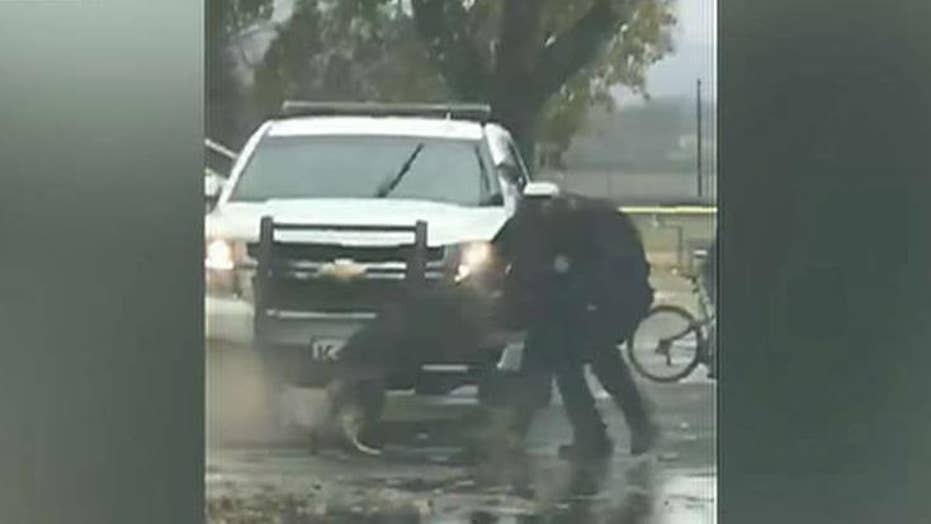 An erratic suspect in New York State is in custody after striking a police officer and then being subdued by the K9 on duty.

A New York police K-9 was filmed taking down a suspect after the man punched a police officer in the face on Sunday.

Randy Martinez, a 23-year-old man who lives in Newburgh, said he was leaving his house with a friend when a man, identified as 31-year-old Tony Mann, wandered into his driveway and threatened him with a knife.

“I rolled down the window and was going to tell him he can’t be on my property, and then he takes out his knife, and I’m just like, ‘Oh, God, no. What’s going to happen?’" Martinez told the Times Herald-Record.

Martinez said he called police because he was "so scared," as his loved ones were still in the house, and started filming the scene when authorities arrived.

In the video, a police officer is seen trying to talk to Mann, who appears to make strange movements before punching the Newburgh police officer, Roman Scuadroni, in the head. Scuadroni takes a moment before he opens his police vehicle door — letting loose his K-9 partner, Lee.

Lee quickly pounces on the suspect, chomping down on his arm, as the police officer puts his arms around Mann's neck to try to restrain him. Mann is ultimately forced to the ground.

Another officer soon arrives on scene to help with the arrest, all while the dog is still actively pursuing Mann before he's eventually pulled off by Scuardroni, who suffered minor cuts and injures.

Investigators said they found a folding knife on Mann, who was transported to a hospital emergency room for intoxication and to be treated for a minor dog bite.