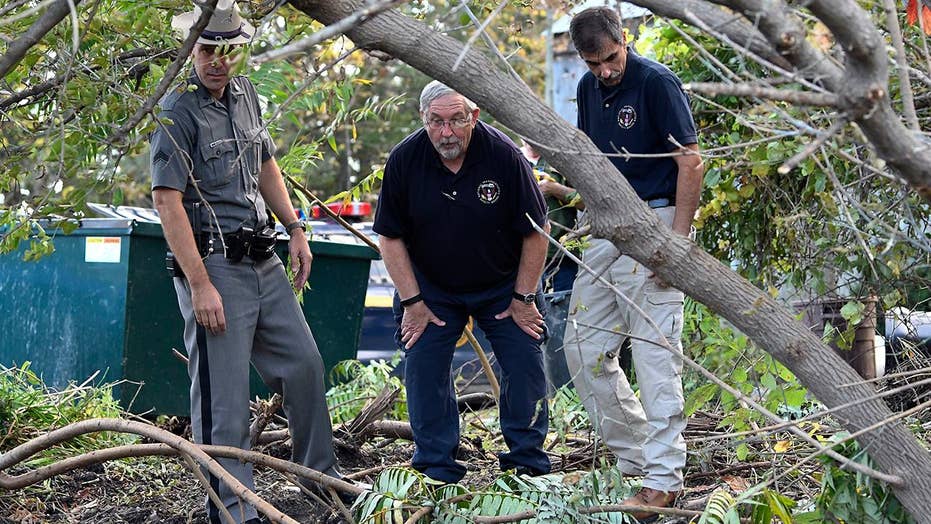 20 dead after a stretch limo en route to a birthday party crashes in upstate New York; Bryan Llenas reports on what investigators are saying about the tragedy.

The limousine driver didn’t have an appropriate license to operate the vehicle when it failed to stop at a dangerous intersection in upstate New York on Saturday, killing 18 occupants heading to a birthday party and two bystanders, New York Gov. Andrew Cuomo said on Monday.

"The owner of the company had no business putting a failed vehicle on the road," Cuomo said. "Prestige has a lot of questions to answer."

A cease-and-desist order was issued to the limousine company as authorities continue to investigate the crash, the governor said.

A woman kneels after placing flowers, Sunday, Oct. 7, 2018, at the scene where 20 people died as the result of a limousine crashing into a parked and unoccupied SUV at an intersection a day earlier, in Schoharie, N.Y. (AP)

"We don't yet know the cause of the accident—if it was a vehicle malfunction, if it was a driver malfunction, a driver error. That's part of the ongoing investigation between the NTSB and the State Police," Cuomo said about the collision that killed 20.

The 2001 Ford Excursion limousine was heading down Route 30 when it failed to stop at the T-junction with state Route 30A. It then crashed into an unoccupied SUV parked at Apple Barrel Country Store and Café in Schoharie, a town 43 miles west of Albany.

Apple Barrel owner Jessica Kirby told the New York Times the limousine was traveling down the hill at “probably over 60 mph” on a road with a 50 mile-per-hour speed limit.

Prior to the deadly collision, one of the occupants had texted a family member about the “terrible condition” of the limousine. Valerie Abeling — the aunt of Erin Vertucci and her new husband Shane McGowan, who were both killed — told the Washington Post her daughter received a text from the couple just 20 minutes before the deadly accident. Abeling said her daughter was not in the vehicle but was invited to the birthday party.

“The vehicle appeared in terrible condition,” Abeling told the newspaper about the text.

Abeling added that the group had initially rented “some kind of bus” but ended up in the limousine after the original rental broke down.

“These were friends just starting their lives, getting married and this is how it ended,” Abeling told the paper. “It’s a tragic loss of beautiful souls.”

The intersection at the crash site is also notoriously known to be dangerous. Officials attempted to make the area safer about seven years ago — but improvements failed to prevent accidents.

"There have been tractor trailers that have come barreling down that hill and it was a miracle they didn't kill somebody," Schoharie Town Supervisor Alan Tavenner previously told the Times Union of Albany.

The crash appeared to be the deadliest land-vehicle accident in the U.S. since a bus ferrying nursing home patients away from Hurricane Rita caught fire in Texas 2005, killing 23.

And it is the deadliest transportation accident overall since February 2009, when a plane crash near Buffalo, New York, killed 50 people, said National Transportation Safety Board chairman Robert Sumwalt. The NTSB is investigating Saturday's crash.