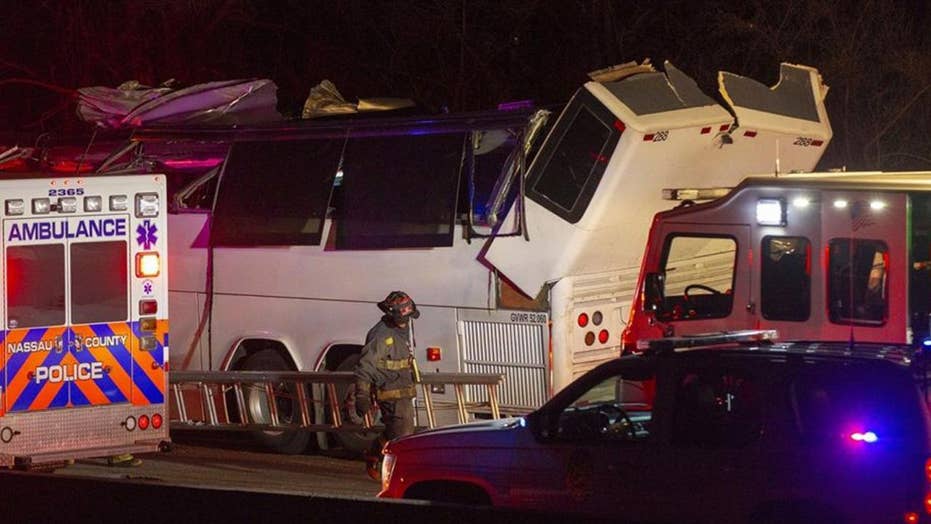 A charter bus carrying teenagers returning from a spring break trip struck a bridge overpass on Long Island, seriously injuring six passengers and mangling the entire length of the top of the bus.

April 8, 2018: Police and firefighters respond to the scene of a charter bus accident on the eastbound Southern State Parkway in Lakeview, N.Y (Howard Schnapp/Newsday via AP)

Video shows teenagers sitting and standing outside of the white damaged bus, some draped in blankets, as firefighters inspect the wreckage. Multiple ambulances and fire trucks responded to the scene.

“Everybody was able to walk out except one, which we extricated,” a fire official told Newsday. “There was glass everywhere. The roof of the bus is down to the top of the seat covers.”

At least six people were seriously injured in the crash. (Howard Schnapp/Newsday via AP)

Police say the 38 students from various Long Island high schools, along with five chaperones, had just returned from Kennedy Airport and were heading to a shopping mall to meet up with parents.

On Friday, a semi-trailer slammed into a bus carrying a youth hockey team in western Canada, killing 15 people and injuring 14 in a catastrophic collision that a doctor compared to an airstrike and left the vehicles obliterated in the snow.