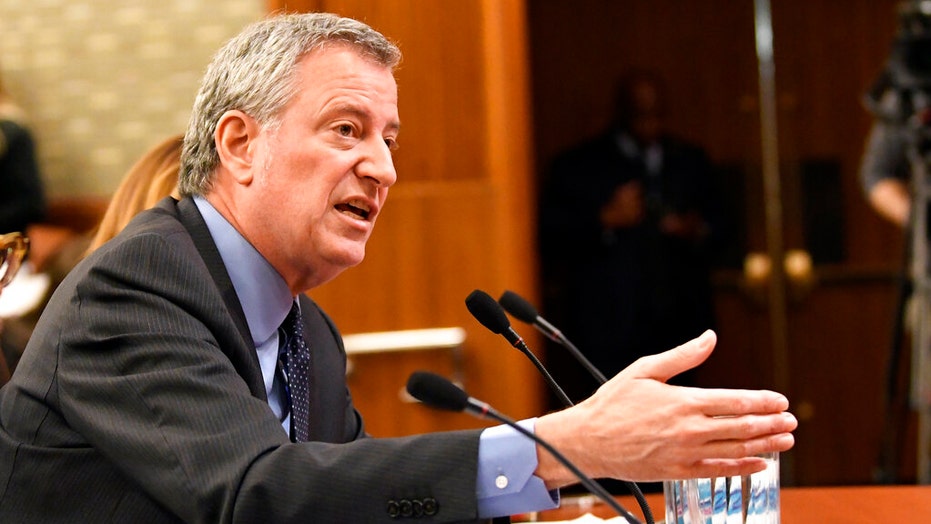 “It’s definitely a possibility,” de Blasio said. “A decision will be made within the next 48 hours.” He did say that such an order would be “particularly difficult in a city like New York,” and many New Yorkers would lose their jobs under such a scenario.

Later Tuesday, Gov. Andrew Cuomo's office pushed back slightly at taking blanket action. “Any blanket quarantine or shelter-in-place policy would require state action and as the governor has said, there is no consideration of that for any locality at this time,” the office said in a statement.

“This crisis certainly puts a clear light on the fact that New York City does not have unlimited resources. We need the federal government to play a much bigger role, and we do not have evidence of that yet. We do not see massive federal stimulus yet but we do see a lot of market volatility.”

On Tuesday, Fox News learned that at President Trump’s direction, Treasury Secretary Steve Mnuchin is pressing GOP senators for a package that would send $200 billion-plus of payments to Americans by early April.

“We’re looking at sending checks to Americans immediately,” Mnuchin said during a news briefing from the White House. “Americans need cash now, the president wants to get cash now. I mean now -- in the next few weeks.”

WHY IS TOILET PAPER VANISHING FROM SUPERMARKETS?

The mayor also announced an executive order that would ban for-hire vehicles from offering ride-shares or pooling options. He said the order was done in agreement with major for-hire vehicle companies such as Uber, Lyft and Via. Only one individual customer would be allowed per vehicle to create social distancing, but married couples and families who live under the same roof would be allowed to ride in the same vehicle.

De Blasio called on every trained health care worker in the city to step up, saying that personnel shortages would be particularly challenging. “We are launching a city-wide campaign and it will look and feel like a wartime message. If you are a health care worker with training, your city needs you now.” He said that 9,000 licensed and retired health care workers are registered with the Medical Reserve Corps and asked all of them to step forward and offer their services.

De Blasio said that the NYPD had been deployed to enforce an order demanding bars and restaurants to close their dine-in areas and only offer takeout and delivery.

The mayor called on all New Yorkers to text COVID to 692-692 and to expect “more serious alerts from time to time.”

De Blasio said that trips to the grocery store, pharmacy, to get clean clothes or to get exercise were sensible but to practice social distancing while doing so.

“This is going to be a long battle but New York is the toughest, most resilient city in the world,” the mayor said. “If anybody can handle coronavirus, New York City can. If New Yorkers do what we did after Sandy, after 9/11, we will get through this.”