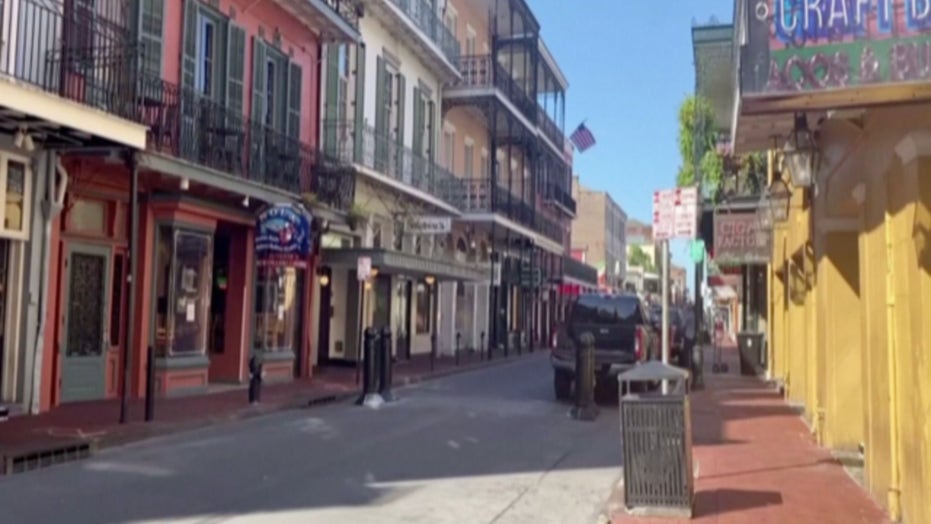 As the city of New Orleans reels from the deadly effects of COVID-19, the virus has put a stranglehold on the city’s tourism industry.

NEW ORLEANS -- As the city of New Orleans reels from the deadly effects of COVID-19, the virus has put a stranglehold on the city’s tourism industry.

Since the onslaught of COVID-19, organizers have had to cancel or reschedule dozens of large-scale events that attract more than a million people to the city every year. The most notable including the cancellation of the Essence Music Festival in July -- where superstars such as Janet Jackson, Bruno Mars and Janelle Monae were all scheduled to perform -- as well as the cancellation of the New Orleans Jazz Festival this month where Lionel Richie, Lizzo and the Foo Fighters were booked to perform live sets to the delight of thousands of attendees.

That has all disappeared -- at least this year. Organizers for the beloved festivals, which attract upward of half a million people each to the city, had tried to hold out and postpone the events until later in the year. But ultimately the virus had its way and forced organizers to scrap their plans and begin looking ahead to 2021.

The potential loss for New Orleans could be significant. According to state and city leaders, both the Jazz Festival and Essence Festival have an economic impact of at least $300 million -- money that would normally support the livelihoods of workers and artists who are a part of the city’s cultural and hospitality economies and depend on the revenue from tourism.

Jermaine Bossier, a New Orleans recording artist, had been booked to perform at this year’s Jazz Festival with his group 79rs Gang. The music act, which incorporates several different genres and is known for the traditional hand-beaded Native American attire group members wear during performances, had planned on releasing new music and putting on performances at various venues leading up to the festival. All of that is now on hold for the foreseeable future.

New Orleans recording artist, Jermaine Bossier dressed up in his traditional hand-beaded Native American attire as he performs in the street. The Coronavirus pandemic has left him with no financial resources to support himself after several events he and his music group were supposed to perform at were canceled. (Jermaine Bossier)

“We had some big gigs lined up,” Bossier said as he went through five gigs his group lost in April alone. “This coronavirus really put a dent in our pockets.”

Bossier said the group has lost out on at least $10,000 from canceled performances in April. That excludes additional losses he’s suffered after he was furloughed from his second job driving a school bus. His family and friends are in similar situations. So borrowing money from loved ones is out of the question, he said. His only hope, with two of the city’s largest festivals out of the picture, is that music venues that attract tourism can reopen and get cash flowing again.

“Those few thousand dollars, man. It helped me out. It really does,” Bossier said. “It’s a lot of local musicians. This how they eat -- by performing. It’s just hard. It’s real hard times around the board.”

The same could be said for New Orleans itself. Mayor Latoya Cantrell announced last month the city was facing a projected budget shortfall of around $150 million after the city halted tax payments from businesses that were desperately trying to stay afloat. Additionally, conventions have been put on hold through May and, according to STR New Orleans, average daily rates at area hotels have dipped 27 percent in comparison to this time last year.

"As [cities] go through and come through it, as I believe they will, it will have an impact on the operations of the city of New Orleans, particularly as it relates to our largest industry, which is hospitality and tourism," Cantrell said.

Peter Ricchiuti, a business professor at Tulane University, said the city was in a uniquely vulnerable predicament.

“I don’t think any city in the country is more vulnerable to what we’ve gone through, when you look at how we make our money in hospitality, and restaurants, live music and festivals,” Ricchiuti said. “The real problem for the city itself is it punched a big hole in the budget. These are sale taxes that aren’t coming in. A very difficult situation.”

Asked if COVID-19 could put New Orleans in a financial struggle similar to Hurricane Katrina, Ricchiuti said it would depend on federal assistance.

“The question is federal dollars at this point. That’s what really got us out of Katrina and ramped up,” he said. "This time it’s, is there going to be enough money to get us through to the other side?”

Bossier hopes some kind of relief is on the way because the light at the end of his tunnel is fading by the day.

“Hopefully a lot of people start receiving some type of assistance and not just in New Orleans -- all over, man.”