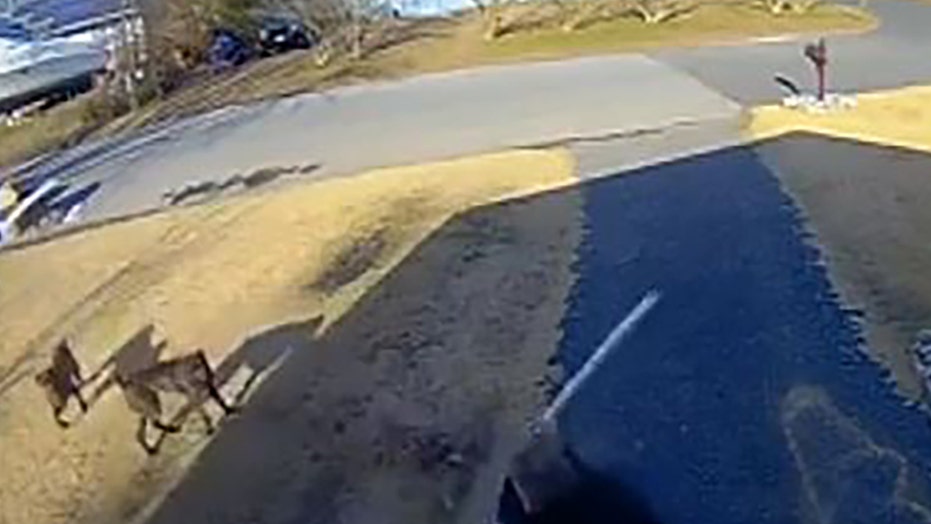 Raw video: Video captures pack of dogs terrorizing a man, neighborhood in Little Egg Harbor Township. Police reported that the pack had bitten several people including a 69-year-old woman. The dogs were captured and taken by animal control.

A southern New Jersey man was captured on video during his desperate attempt to fight off a pack of three dogs that have long terrorized his neighborhood as the pets ran amok Monday, biting at least six residents before police wrangled the animals.

The dogs, all belonging to the same owner, were already well-known among the local police force in Little Egg Harbor Township, having bitten at least six other residents on seven occasions over the past four months, police wrote on Facebook.

The man in the video, identified only as Mike, knew the dogs were on the prowl again after he heard barking and screaming from around the block, he told FOX29 Philadelphia. He said the dogs had attacked an elderly woman.

Mike said he immediately went next door to warn his neighbor’s mother-in-law, who would soon be picking up her 9-year-old granddaughter from the bus stop.

Three dogs charged a man named Mike after he tried to warn a neighbor that the pack was on the loose in the neighborhood again. (Little Egg Harbor Police Department)

"As he warned her and walked back toward his house, that's when he had to fight for his life and my mother-in-law's life," neighbor Nick Leonardis told the station.

Video footage from a doorbell camera shows the three dogs charging across the lawn at Mike as he fends off his pursuers with a bat. The dogs continue to chase Mike until a police cruiser pulls up and scares the animals off.

"I couldn't believe what I saw,” Leonardis said. “It was crazy and it was terrifying."

Police said it took officers an hour to contain the dogs after they bit at least six residents, including a 69-year-old woman and a 40-year-old man, both of whom suffered multiple bites. The dogs were then turned over to animal control.

Animal control had previously removed the three dogs from their owner following an incident in December, police said, adding that the owner has been cited multiple times. However, a court ruled for the dogs to be released back to the owner, FOX29 reported.

Police have vowed to make sure the dogs don’t endanger or frighten residents ever again.

“Yesterday's events were horrific, and nobody should live in fear of allowing their children to play outside, walk down the street or simply get the mail,” the department said.

“The Little Egg Harbor Police Department will do everything in its power to ensure these dogs are never returned and allowed to menace this neighborhood in the future.”