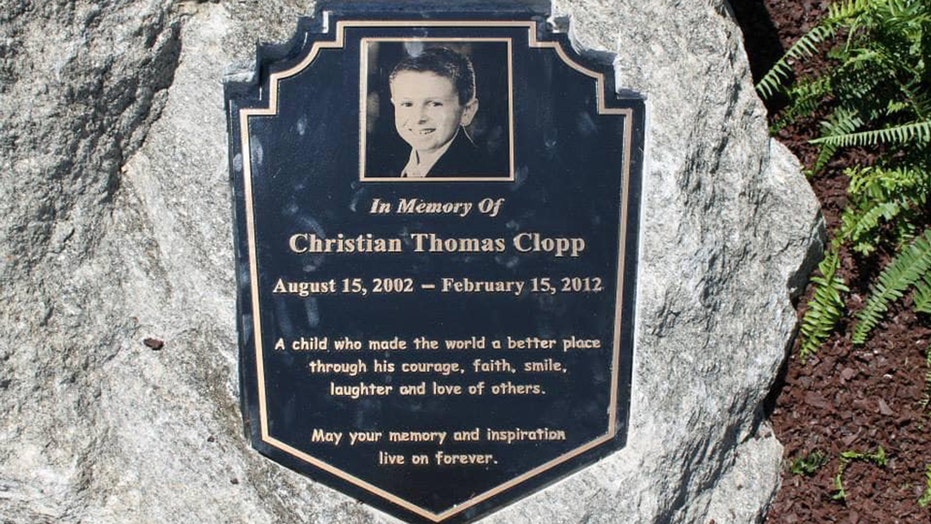 The New Jersey man allegedly seen in a viral video urinating on a memorial for a 9-year-old boy who died of cancer has been fired from his job in his family's business.

Bryan Bellace, 23, was arrested Sunday after a video circulating online seemingly showed him using the memorial at a playground in Mays Landing as a bathroom stall. Daniel Flippen, 23, was also arrested in connection with the video, which he allegedly filmed.

The memorial is for Christian Clopp, who died in 2012 from an inoperable brain tumor. The plaque on the memorial reads, “A child who made the world a better place through his courage, faith, smile, laughter and love of others. May your memory and inspiration live on forever.”

Christian Clopp died in 2012 at 9 years old from an inoperable brain tumor. A memorial him sits at a playground in Mays Landing, N.J. (Facebook)

Bellace, who was charged with lewdness, disorderly conduct, criminal mischief, and having an open alcoholic beverage in a park, has said he's sorry — but despite that, his father said he's fired him from Bruce Bellace Plumbing and Heating, the family business.

"I had to remove him from employment," Bruce Bellace told the Press of Atlantic City. "We apologized to the family...I'm sorry for his actions. I'm not proud of him."

In the video, the man identified as Bellace appears to be wearing a shirt with the plumbing and heating business's logo. Bruce Bellace said he learned of his son's alleged actions after people began contacting his wife on Facebook about it.

Bellace apologized for his actions on Monday, calling what he did "a huge mistake."

"It was a big mistake I made. I was intoxicated. I didn't know what I was doing at the time," he told ABC News. "When I came to my senses the next day, I realized I made a huge mistake. I wish I could take it all back and make things right."

Mark Clopp, the 9-year-old boy's father a retired police officer, told Fox News on Tuesday that Bellace apologized to the Clopp family in person, and that he forgives the 23-year-old.

He noted that Flippen also apologized, and added that Bellace said he's going to seek help for a drinking problem, which Mark Clopp described as "very positive."

"With all the craziness in the world today, I thought it was a teaching moment, where instead of reacting with violence or negativity, a lot can be accomplished by using some intelligence," he said.

Mark Clopp wrote on Facebook that, "as bad as [this all] started out, it spiraled into volunteers cleaning the playground, Facebook abuzz with mostly positive thoughts, a community rallying around a good cause again and a fundraiser to beautify the playground and recreation fields for the enjoyment of families."

After the video surfaced, the Hamilton Township community gathered to clean the memorial, Mark Clopp said. He told Fox News that following the video, loved ones have started a fundraiser meant to beautify and expand the playground and surrounding park.