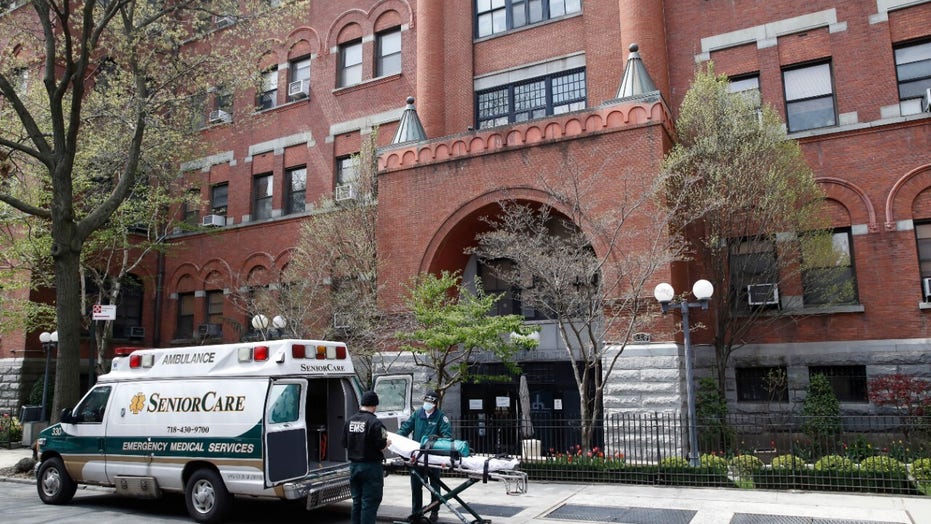 Bryan Llenas reports from outside the Cobble Hill Health Center in Brooklyn.

As coronavirus spreads across America, so too does the threat of being charged with "negligent homicide."

"People are dying. This naturally causes outrage, sadness and a whole other range of emotions which make [the victims'] friends and relatives, and perhaps politicians and law enforcement, want to point the finger at some person or some entity as the cause of these deaths," Matthew McCann, New York-based attorney and adjunct professor at the Brooklyn Law School, told Fox News.

"It's pretty clear that no person or entity can intentionally cause another person's death via COVID-19, so this more 'passive' type of culpability is being discussed."

In one example, Fox News obtained a letter written by the Republican Mayor Jim Brainard of the 100,000-person city of Carmel, Ind., in which all assisted living and nursing home facility administrators were directed to be tested for COVID-19, the official term for the novel pathogen.

"One of our local labs now has the ability to quickly test a large number of people using the same test authorized by the CDC. Residents in nursing homes and assisted living facilities are the most vulnerable citizens to COVID-19, and that is why we want to move quickly to coordinate testing of your staff," Brainard wrote.

"If a resident of one of your facilities has tested positive for having the virus, then all residents in that facility should be tested as well."

However, Brainard told Fox News that he was left with little choice but to send a local police officer to hand-deliver a letter to one prominent elder care facility which failed to act and did not respond to calls and emails from his office. That letter came with an especially severe threat: reckless homicide, another term for negligent homicide.

"The next day, we learned that he responded to a local reporter's inquiry that he had changed his mind, and he would arrange to test the staff," Brainard continued, adding that he later issued a number of similar threats for those who did not respond. "The goal of testing as many people as possible is to identify as many asymptomatic individuals as possible so that they don't spread the virus.  This will help reduce the number of people who become ill, and we provide our scientists and researchers time to develop treatments and eventually a vaccine."

Carmel has documented more than 16 deaths from the novel pathogen, and statewide Indiana has had more than 12,500 infections and over 661 fatalities.

Nursing and elder care facilities across the country have been hit especially hard by the illness, with more than 10,000 deaths, as per a tabulation from The Wall Street Journal this week.

"To be negligent, a person or organization fails to use the care that a reasonable person should use in a given situation. It differs from other forms of homicide due to the lack of proof of malice and intent," explained Mark Biros, a Georgetown University law professor and former Assistant US Attorney for the District of Columbia. "In some states, rather than having a specific crime of negligent homicide, it is subsumed in a crime called involuntary manslaughter."

Protesters gather outside the Indiana Governor's mansion in Indianapolis, Saturday, April 18, 2020, urging Gov. Eric Holcomb to back off restrictions on Indiana residents because of the coronavirus, and restart the economy. (AP Photo/Michael Conroy)

So could hospitals, nursing homes, or other places the virus has spread to be subject to these kinds of charges once the pandemic dies down? According to Biros, theoretically, the answer is yes.

"This charge is most frequently used in prosecuting deaths caused in motor vehicle accidents, then probably health care providers and in some employee death circumstances," he explained. "Penalties under these statutes generally range from six months to 10 years."

And while several health care professionals interviewed by Fox News expressed steep concern for the possibility of lawsuits given the chaos of the situation, especially in the early weeks, the overall legal consensus is that most suits would likely fall apart.

"Given the pressure under which health care providers are working, I do not see any reasonable likelihood that such charges would be filed in connection with negligence in providing care," Biros said. "That is not because I believe that there may not be negligence that leads to death. It is just that prosecuting a health caregiver for failing to meet a reasonable standard of care in an environment where, according to public accounts, health care providers are operating under severe [shortages of] equipment, and personnel shortages would be difficult."

CORONAVIRUS CRISIS: WHAT ARE THE POTENTIAL LONG-TERM HEALTH IMPACTS?

Troy Slaten, a California-based criminal defense attorney, said: "We will definitely see wrongful death and elder abuse lawsuits popping up in the wake of the pandemic. The insurance companies are already bracing for these suits.

"As long as they can show they did what was reasonable, isolated infected people, used proper sanitation procedures, told sick workers to stay home, etc. they are unlikely to have criminal or civil liability. But even if you do everything right as a company, you can still get sued. Whether or not the plaintiff will be successful is another story."

Furthermore, there are some legal scholars who are also now contending that President Trump should personally be held accountable for the pandemic, which originated out of Wuhan, China, late last year, and quickly spawned to almost every pocket of the planet.

Earlier this month, MSNBC legal analyst Glenn Kirscher posed the prospect that Trump could face criminal liability after leaving office, underscoring in an interview with The Intercept that a prosecutor could put forward an "involuntary manslaughter" case with allegations of federal mismanagement or "ignoring" early warning signs.

However, several other legal experts dismissed such a notion.

"The chance of prosecution is too remote to consider," San Diego-based attorney, Jan Ronis said. "Any suggestion that the president could face criminal, or even civil liability, for his conduct in that regard as preposterous."

Slaten concurred that to suggest that President Trump has any criminal liability for his actions or alleged inaction in response to the pandemic is "fantastical at best and reckless at worst."

Nonetheless, legal ramifications are expected to touch far and wide, from holding the Chinese government accountable and suing state and local governments over stringent lockdown measures, major U.S. business lobbying groups are already seeking protection from litigation from workers once the economy opens.