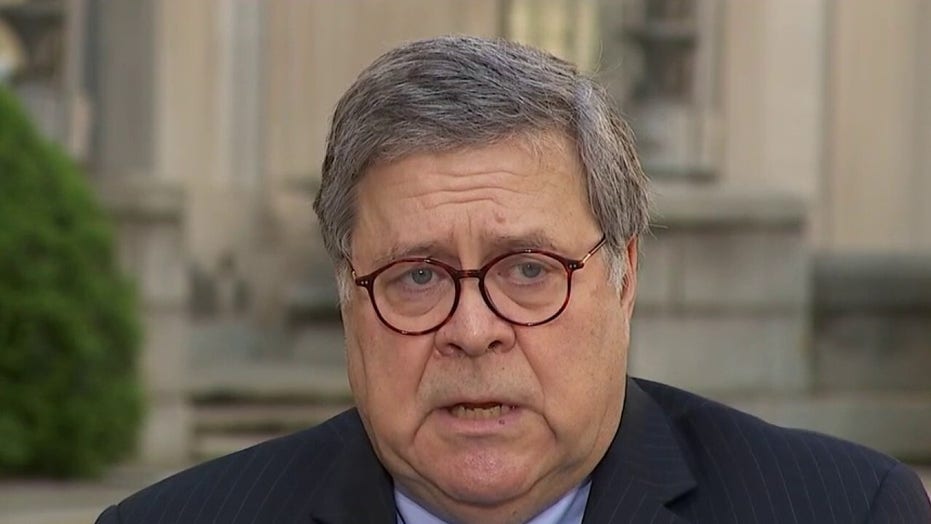 Attorney General Bill Barr took a clear swipe Tuesday at state restrictions on citizens during the coronavirus pandemic, indicating not only that people could sue over measures that go too far but that the Justice Department could end up siding with them against the states.

In an appearance on Hugh Hewitt’s radio program, Barr specified some of the legal issues raised by state orders – likening some to "house arrest" – and how they could lead the federal government to get involved.

“Our federal constitutional rights don’t go away in an emergency. They constrain what the government can do,” Barr said in the Tuesday interview. “And in a circumstance like this, they put on the government the burden to make sure that whatever burdens it’s putting on our constitutional liberties are strictly necessary to deal with the problem. They have to be targeted. They have to use less intrusive means if they are equally effective in dealing with the problem. And that’s the situation we’re in today. We’re moving into a period where we have to do a better job of targeting the measures we’re deploying to deal with this virus.”

The attorney general warned that while some state orders may still be necessary, others may go too far, given that states are seeing progress toward the goal of reducing the spread of the virus.

“You know, the idea that you have to stay in your house is disturbingly close to house arrest,” Barr said in the Tuesday interview. “I’m not saying it wasn’t justified. I’m not saying in some places it might still be justified. But it’s very onerous, as is shutting down your livelihood. So these are very, very burdensome impingements on liberty, and we adopted them, we have to remember, for the limited purpose of slowing down the spread, that is bending the curve. ... And we are now seeing that these are bending the curve, and now we have to come up with more targeted approaches.”

Barr's statements come as protests against state orders have sprung up around the country. A particularly aggressive order issued by Michigan Gov. Gretchen Whitmer even drew harsh criticism from state lawmakers.

Hewitt later suggested that if people are upset that state orders are impinging on their rights, they can sue. Barr agreed and said the Justice Department would look at those cases and possibly get involved, siding with the citizens.

“Well, if people bring those lawsuits, we’ll take a look at it at that time. And if we think it’s, you know, justified, we would take a position,” he said. “That’s what we’re doing now. We, you know, we’re looking carefully at a number of these rules that are being put into place. And if we think one goes too far, we initially try to jawbone the governors into rolling them back or adjusting them. And if they’re not and people bring lawsuits, we file [a] statement of interest and side with the plaintiffs.”

Barr pointed out that not only is there an issue of going too far with measures that may impinge on constitutional rights, there is also the issue of the burden orders could place on interstate commerce, which falls under federal jurisdiction.

“We do have a national economy which is the responsibility of the federal government. So it is possible that governors will take measures that impair interstate commerce. And just where that line is drawn, you know, remains to be seen,” Barr said. He added that so far he has not seen any violation of the Commerce Clause.

Democratic leaders criticized Barr for his positions, claiming his proposed actions would trample over states’ powers.

“So much for states’ rights. I mean I think they’ll be way off base. I think he will lose legally. And his view of an overarching almost monarchical president never ceases to amaze me,” Senate Minority Leader Chuck Schumer, D-N.Y., told reporters Tuesday.

House Speaker Nancy Pelosi said she believes Barr is getting “into a place that I think even the public knows doesn’t make sense.”