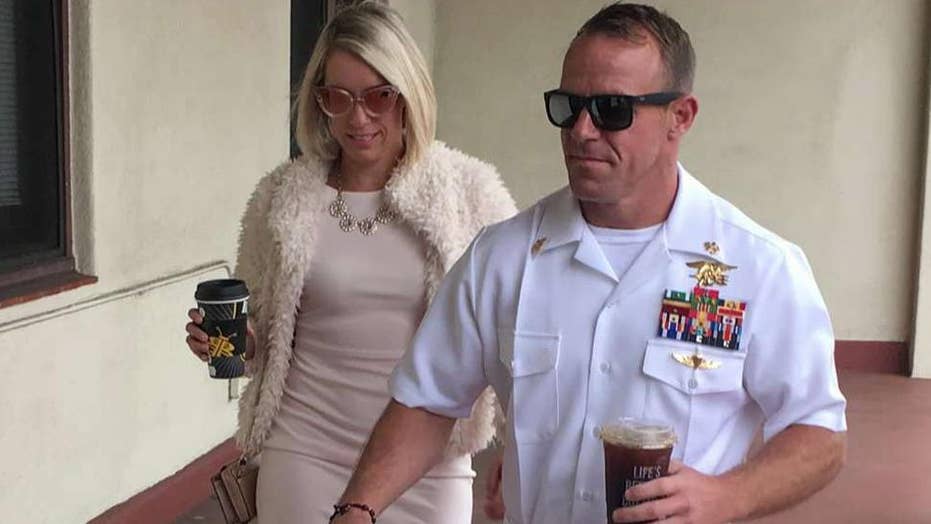 Navy SEAL Eddie Gallagher will be reduced from an E7 to an E6 and will receive a cut to his pay and benefits for posing for a picture with a corpse.

Navy SEAL Eddie Gallagher will have his rank reduced and is sentenced to four months of confinement, which he has already served, for posing with the body of a dead Islamic State fighter, the San Diego jury decided Wednesday.

Gallagher's attorney confirmed to Fox News that he will retire from the U.S. Navy when he becomes eligible in about three weeks as he hits his 20 years of service.

The SEAL was found not guilty Tuesday on six of the most serious counts he was facing, including premeditated murder, willfully discharging a firearm to endanger human life, retaliation against members of his platoon for reporting his alleged actions, obstruction of justice and the attempted murders of two noncombatants.

"I feel fine. It’s all right, you know? The jury came with a verdict. I trust them," Gallagher told Fox News after his sentencing Wednesday, which stipulates his rank will be reduced to an E6 paygrade, affecting both his pay and his benefits. A jury also sentenced the SEAL to pay $2,697 per month for four months.

Prior to sentencing, Gallagher’s defense succeeded in getting the judge to reduce the potential forfeiture to 50 percent, arguing that some of Gallagher’s pre-trial confinement was tantamount to punishment based on the fact that he was denied access to a computer and some medical treatment. Even though the jury came back with a 4-month partial forfeiture of pay, it will be cut in half, resulting in 2 months partial forfeiture.

He was accused of stabbing to death the 15-year-old combatant in 2017 and posing with the corpse for photos. He endured a dramatic trial where defense attorneys argued that Gallagher's platoon "concocted" the accusations against him, pointing to his history as a decorated SEAL with 19 years of service with multiple tours in Iraq and Afghanistan and earned the Bronze Star with V for Valor twice, a Meritorious Unit Commendation and a trio of Navy and Marine Corps Achievement medals, among other recognitions and decorations.

Nearly a dozen members of Gallagher's platoon testified during the trial against him, revealing that nearly all the platoon members posed for photos with the dead prisoner and witnessed Gallagher read his reenlistment oath near the body, actions prosecutors said proved that Gallagher was "proud" of his actions.

Prior to the sentencing, Lt. Brian John, a Navy prosecutor, warned jurors that “a message needs to be sent” for photos such as the one Gallagher posed for, as they “have [the] potential to fuel propaganda.”

“The chief, rather than taking those photos, should have been the one stopping them,” he added.

“What is fair?” came the response from Maj. Nelson Candelario, a Marine defense lawyer representing Gallagher during the defense presentation, calling for “no additional punishment."

Gallagher had previously served nine months in prison awaiting trial but was released ahead of trial proceedings at the end of May as the judge attempted to rectify alleged prosecutorial misconduct which included the unauthorized tracking of the defense's emails.

“It was a regretful decision to pose in the photos," his attorney Tim Parlatore said Wednesday after sentencing. "It obviously was something, if he could take that back he would."

"Chief Gallagher wants that to be a lesson to everybody else, all of the other members of the SEAL community, the Navy, the army the marine corp and all the other services, of your actions have consequences and even though he did not commit a murder, even though he did not do these shootings or anything else, yes he made a mistake with these photos and that’s something that every leader, every warrior should think about when they’re out there because it can have significant consequences," Parlatore added.

Gallagher, in an interview earlier Wednesday on ‘Fox & Friends' alongside his wife, Andrea, and Parlatore, said media reports tried to frame him “as a criminal from the get-go.

“But we knew the truth the whole time,” he said. “We knew I was innocent of these charges. I overcame it by having my strong wife with me the whole time and my legal team fighting for me."

The months leading up to his trial were marked with controversy. Defense lawyers and military prosecutors had disputed the conditions of Gallagher’s pre-trial treatment, and at one point, even President Trump got involved, tweeting out that Gallagher would be moved to “less restrictive confinement while he awaits his day in court.”

Marc Mukasey, one of Gallagher's lawyers who is also President Trump's attorney thanked the president for bringing "this case out of the shadows and into the light."

"America saw what was being done to Eddie Gallagher and thanks to the president for bringing it into the light so that we could expose the injustice that was being done," Mukasey said Wednesday.

Perhaps the biggest bombshell in the case occurred on June 20, when Gallagher's colleague, Special Operator 1st Class Corey Scott, admitted to asphyxiating the ISIS fighter back in 2017, contrary to the testimony of at least seven other SEALs who said Gallagher stabbed the ISIS fighter.

Parlatore said he suspected Scott may have asphyxiated the ISIS fighter after interviewing him before the trial, but Scott, testifying under an immunity deal from the prosecution, did not fully admit it until he took the stand.

"At that moment, I punched Eddie in the leg and said 'we got him,'" Parlatore recalled.

Gallagher has long held throughout the trial he believes his platoon behaved in a manner not representative of the SEAL community as a whole.

"This has put a black eye on this community. I want the nation to know this is not what our community is about. This community is full of elite warriors that I have been honored and blessed to work with for the past 20 years," Gallagher said.