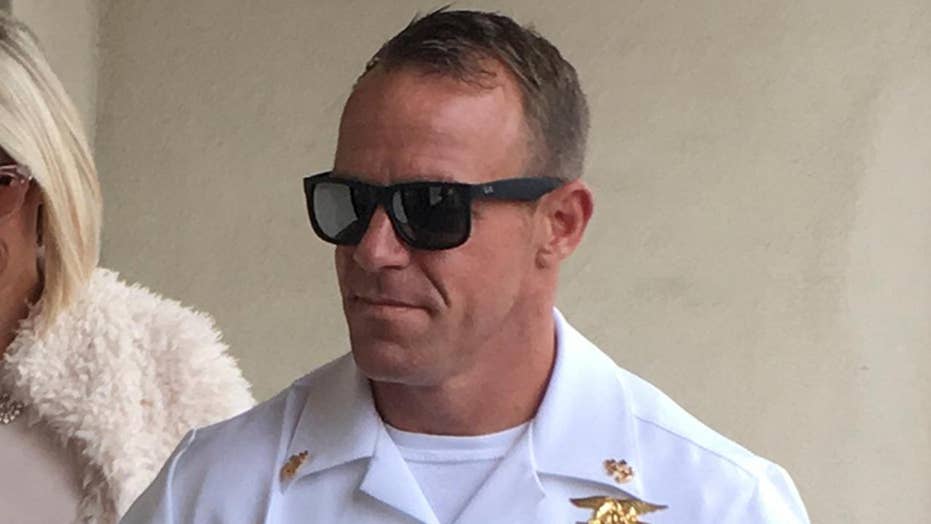 Navy SEAL Eddie Gallagher is accused of murdering an ISIS prisoner; Philip Holloway explains why the prosecution has a slight advantage.

Jury deliberations started Monday in the trial of decorated Navy SEAL Edward "Eddie" Gallagher, as military prosecutors said his words and actions proved he murdered a member of the Islamic State terror network in May 2017, while the defense said the prosecution's case had "huge gaping holes."

Gallagher, 40, has been accused of stabbing to death a teenager who was detained as a member of ISIS in Iraq. He also allegedly posed with the detainee's corpse for photographs and shot civilians.

The trial in San Diego has captured national attention as Gallagher's defense has been championed by his family and some congressional Republicans who have claimed he's a hero getting railroaded. President Trump even intervened to get Gallagher removed from the brig as he awaited trial and is said to be considering a pardon for him.

Gallagher's defense attorney argued his client was a subject of "fixation" by military prosecutors. "They started with a conclusion ... [and] ... ignored everything that didn't fit," Timothy Parlatore told the jury of five Marines and two sailors during his closing argument.

Summing up for the prosecution, Cmdr. Jeff Pietrzyk argued that Gallagher's own words and actions, as well as the testimony of his fellow troops, demonstrated his guilt.

Navy SEAL Eddie Gallagher says he's 'not nervous at all' as he arrives at court; Jonathan Hunt reports from San Diego.

The prosecutor dismissed the testimony of Special Operator Corey Scott, who testified he saw Gallagher stab the prisoner in the neck but stunned the court when he said he was the one who ultimately killed the prisoner by plugging his breathing tube with his thumb as an act of mercy.

Parlatore contended that investigators never asked Scott about the cause of the detainee's death, which is why they were surprised by his testimony.

"After he [Scott] received immunity, he told them," the defense attorney said. "... Nobody could have anticipated unless they asked him the right question the first time around ... They focused solely on Eddie Gallagher ... They didn't even listen to their own witness."

During the trial, it was revealed that nearly all the platoon members readily posed for photos with the dead prisoner and watched as Gallagher read his reenlistment oath near the body in an impromptu ceremony.

"That's something you do over your accomplishment," Pietrzyk said. "... He [Gallagher] was proud of what he had just done."

Nearly a dozen SEALs testified over two weeks. Most were granted immunity to protect them from being prosecuted for acts they described on the stand.

Seven SEALs said Gallagher unexpectedly stabbed the prisoner, moments after he and the other medics treated the 17-year-old boy. Two, including Scott, testified they saw Gallagher plunge his knife into the prisoner's neck.

Parlatore accused those witnesses of plotting against Gallagher to accuse him of murder and singled out Special Warfare Operator Chief Craig Miller, the first to testify that he saw Gallagher stab the detainee, as "the king of this mutiny."

The prosecution was cleared shocked when their star witness admitted to the murder, says John Yoo, former deputy assistant attorney general in the Bush administration.

An Iraqi general who handed the wounded prisoner to the SEALs testified that Gallagher did not stab the boy. And, Marine Staff Sgt. Giorgio Kirylo said after the militant died that he moved the body to take a "cool guy trophy" photo with it and saw no stab wounds on his neck.

The prosecutor said he wouldn't try to argue sympathy for the teenage prisoner, who had been wounded in an airstrike.

"Before the airstrike, he would have done anything in his power to kill an American," Pietrzyk said before adding the prisoner was not a lawful target once he was in the SEALs' custody.

"We're not ISIS. When we capture someone and they're out of the fight, that's it," Pietrzyk said. "That's where the line is drawn."

Fox News' Dan Gallo and Jonathan Hunt in San Diego and The Associated Press contributed to this report.