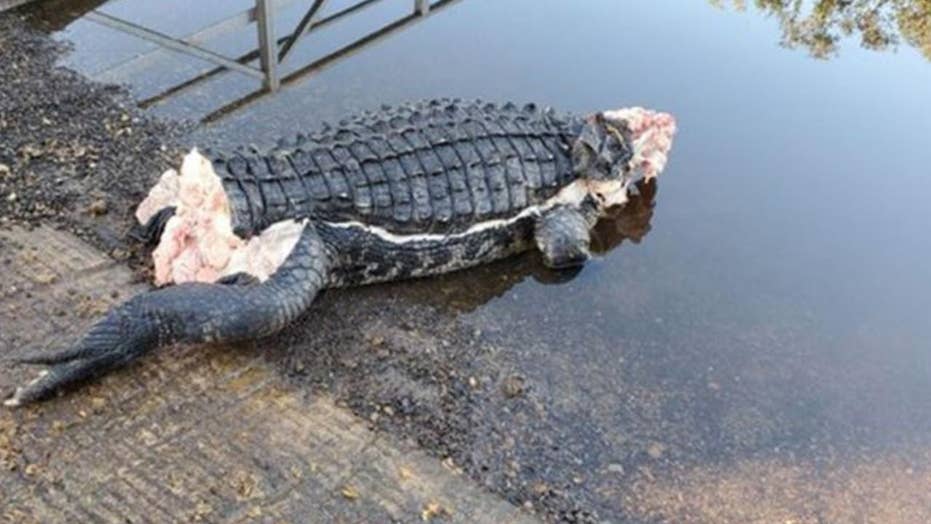 Kayaker Kino Velez discovered a dead alligator this week. The mutilated animal was missing its head and tail. This is the second alligator found mutilated in October. Florida Fish and Wildlife are investigating.

The mutilated body of an alligator, with its head and tail cut off, was found Thursday in Florida – marking a second such discovery in the state in less than a month.

The remains were found Thursday morning by a kayaker at Hosford Park Boat Ramp off the St. Lucie River in the town of Stuart.

A mutilated alligator in Florida was discovered with its head, tail and many limbs missing. (Kino Velez/Twitter)

“This needs to be picked up before it rots,” Kino Velez, who tweeted a photo of the discovery, said in the post.

The photo shows the largely dismembered alligator with its head, tail and most of its limbs missing.

“The fact that the tail is missing, that’s the dead give-away that it has been poached,” Velez told the Orlando Sentinel. “The tail is where the gator’s mean in found.”

He told the newspaper that he believes he has seen this particular alligator before while kayaking down the river.

“It belongs to all of us and they took a resource from us,” Velez said. “And we won’t get that back anytime soon.”

This is the second such discovery in less than a month.

An alligator was found without its head on the side of a roadway in Sarasota early last month, according to Fox 35 Orlando.

The Florida Fish and Wildlife is said to be investigating both discoveries.