Former FBI supervisory special agent Jim Clemente analyzes the traits that community members and law enforcement officials should look for in  suspects in the Idaho murders case on 'Your World.'

MOSCOW, Idaho – The chief of the Moscow, Idaho police department dismissed the possibility of its investigation into the murders of four University of Idaho students on Nov. 13 turning cold, stating that the case will be solved.

Moscow Police Department Chief James Fry made the comments to the Moscow-Pullman Daily News on Thursday, over two weeks after the four University of Idaho students, Ethan Chapin, 20; Xana Kernodle, 20; Madison Mogen, 21; and Kaylee Goncalves, 21, were fatally stabbed in a King Road house near the college campus between the hours of 3 and 4 a.m.

"I’m not even going to speculate on that, number one, because that’s not even in my mind," Fry said when asked if the incident will turn into a cold case. "We’re going to solve this. We’re going to continue to work until we solve it."

The two roommates who were unharmed in the attack woke up later in the morning on Nov. 13 and "summoned" friends because "they believed one of the second-floor victims had passed out and was not waking up," police said, adding that the 911 call at 11:58 a.m. was made on one of the roommates' cell phone. "Multiple people" talked with the 911 dispatcher before police arrived at the home, officials said.

During the interview, Fry said that little information is being released to protect the cases' integrity.

"We're always going to hold stuff back as much as we possibly can because when you’re talking about the integrity of the case, you’re talking about when this goes to trial, have you tainted jurors?" Fry said. "There’s a way bigger picture here than just people knowing. Because for it to be a fair trial, you have to have people who don’t know facts and have already made up their own opinions on them."

Ethan Chapin, 20, Xana Kernodle, 20, Madison Mogen, 21, and Kaylee Goncalves, 21, along with the women's two other roommates in Goncalves' final Instagram post, shared the day before the slayings. (@kayleegoncalves/Instagram)

Fry also addressed complaints from the community about the speed of the investigation.

"I think people need to realize that these things take time in order to get the evidence processed and processed properly without destroying it or contaminating it," he said. 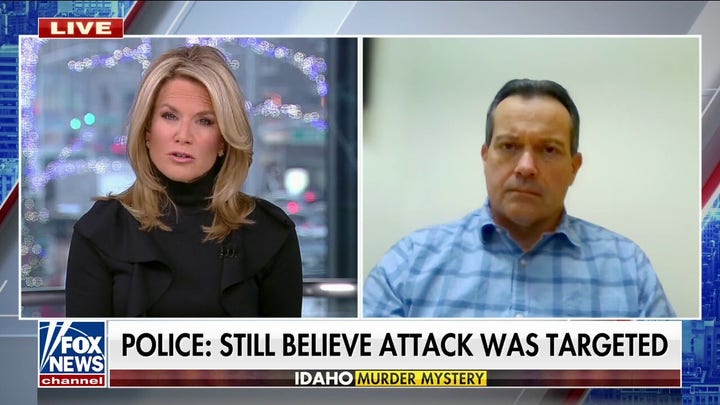 Fry stated that the police department remains confident the attack was targeted.

On Wednesday night, the Moscow Police Department said in a press release that "detectives do not currently know if the residence or any occupants were specifically targeted but continue to investigate."

A memorial for the slain students at the University of Idaho, Monday, Nov. 28, 2022 is covered in snow. The menorial is in honor of the victims of a quadruple homicide involving in an off-campus home on Nov. 13. (Derek Shook for Fox News Digital)

In a statement provided to Fox News on Thursday, the Moscow Police Department clarified that it believes the attack was targeted.

Investigators search a home in Moscow, Idaho on Monday, Nov. 14, 2022, where four University of Idaho students were killed over the weekend in an apparent quadruple homicide. The victims are Ethan Chapin, 20, of Conway, Washington; Madison Mogen, 21, of Coeur d'Alene, Idaho; Xana Kernodle, 20, of Avondale, Idaho; and Kaylee GonCalves, 21, of Rathdrum, Idaho. (Derek Shook for Fox News Digital)

"Our clarification last night directly addressed comments made by Latah County Prosecutor Thompson, who said the suspect(s) specifically looked at this residence, and that one or more of the occupants were undoubtedly targeted. We remain consistent in our belief that this was indeed a targeted attack but have not concluded if the target was the residence or its occupants," the statement read.