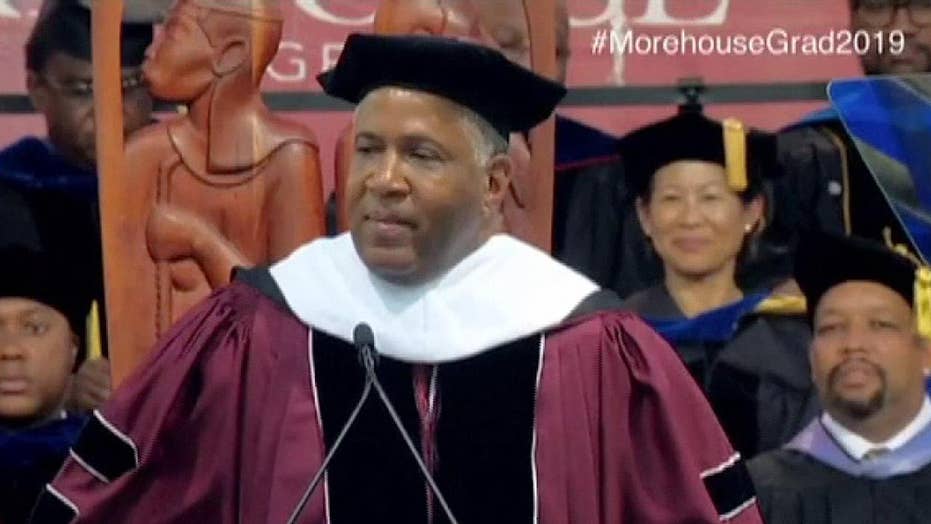 The keynote speaker at Morehouse College' commencement ceremony announced a grant Sunday wiping out the student debt of the entire 2019 graduating class.

Billionaire Robert Smith’s surprise gift in front of nearly 400 graduating seniors may be worth about $40 million, officials said.

"My family is going to create a grant to eliminate your student loans," Smith said, according to WXIA-TV. "You great Morehouse men are bound only by the limits of your own conviction and creativity."

Tonga Releford, whose son Charles Releford III is a member of the Class of 2019, estimated that his student loans total about $70,000, according to the Atlanta Journal-Constitution.

“I feel like it’s Mother’s Day all over again,” she said.

The announcement elicited the biggest cheers of the morning.

"When Dr. King said that the 'arc of the moral universe bends toward justice,' he wasn't saying it bends on its own accord. It bends because we choose to put our shoulders into it together and push," Smith told the ceremony, according to WXIA.

Robert F. Smith, left, laughs with David Thomas, center, and actress Angela Bassett at Morehouse College on Sunday, May 19, 2019, in Atlanta. Smith, a billionaire technology investor and philanthropist, said he will provide grants to wipe out the student debt of the entire graduating class at Morehouse College - an estimated $40 million. (Atlanta Journal-Constitution via AP)

Smith was the recipient of an honorary doctorate from Morehouse during the commencement.

Smith is the founder and CEO of Vista Equity Partners, a private equity firm that invests in software, data and technology-driven companies.

He is a graduate of Cornell and Columbia Business School.

Morehouse announced in January a $1.5 million donation from Smith for student scholarships and a new park on campus.