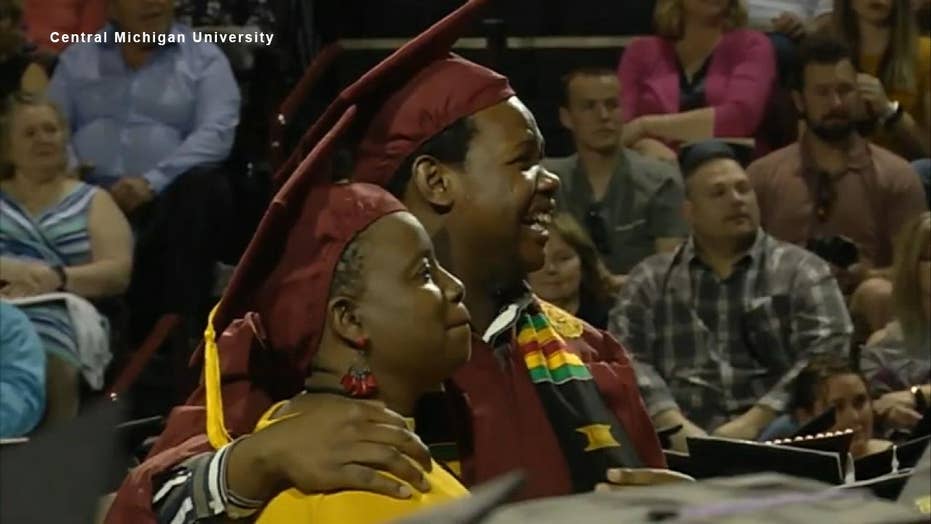 Michigan woman, graduating from Ferris State University, missed her own graduation ceremony to attend her son’s commencement at Central Michigan University and was surprised to receive her diploma from CMU’s president.

Two special college grads in the class of 2019 – from two different universities – were shocked to receive their degrees together at the same ceremony.

One Michigan woman, graduating from Ferris State University, missed her own graduation ceremony to attend her son’s commencement at Central Michigan University – and was surprised to receive her diploma from CMU’s president.

The tear-jerking moment won major applause on big day and later on social media, in video footage that has since gone viral on Twitter with over 704,000 views.

On May 4, Stephan Wilson received his bachelor's degree of fine arts in music theater from CMU and attended convocation with his mom, Sharonda Wilson, the Detroit Free Press reports.

Set to graduate from Ferris State, Sharonda, meanwhile, had no idea that there was a surprise in store for her during the big event.

DATELESS TEEN TAKES PROM PICTURES WITH 'SUAVE' GRANDFATHER: 'I KNEW HE'D COME THROUGH FOR ME'

“I told a friend of mine that [my] mom was skipping her graduation to be with me, and she used her magic to help Dr. Davies orchestrate that moment," Stephan told the Free Press.

In the sweet scene, Stephan helps his mom put on a crimson and gold graduation cap, moments before CMU President Bob Davies made a one-of-a-kind announcement from the main stage at Plachta Auditorium, Yahoo Lifestyle reports.

“I made a call today when I found this out, to David Eisler, the president of Ferris State University, so please pay attention,” Davies began.

“By the virtue of the authority vested in me, by the state of Michigan and the board of trustees, on behalf of President Eisler and Ferris State trustees, I confer upon you, Sharonda Wilson, the bachelor’s degree that you have earned, with all rights privileges pertaining thereto,” the school president declared. “Please move your tassel from your right to your left.”

The crowd, naturally, went wild, as the overjoyed mother and son celebrated the powerful moment arm in arm.

Days later, Stephan told Fox 17 that he is “truly still in awe” of what happened.

“My mom has been so supportive of my education, and has been working so hard on her own educational journey,” the CMU grad mused to Yahoo. “It was unbelievably special to share this moment together at commencement with her. I had been looking forward to graduation for a long time, but this was so much more meaningful than I could have imagined.”

President Davies, meanwhile, told the unique double grant of the degrees was simply the right thing to do.

“The commencement ceremony is a celebration of student achievement and it acknowledges the passion, dedication and enthusiasm required to earn a college degree. Sharonda and Stephan both put in the long hours and hard work, and they deserved the chance to celebrate together as a family,” he told the outlet. “We appreciated the opportunity to partner with our friends at Ferris State to recognize and celebrate this milestone achievement for both Stephan and Sharonda.”

The Wilson family’s special moment, too, moved the hearts of many Twitter users.

“What a Mother won't do!” one commenter cried.

“First class move by [Davies] as always!!!” another cheered.

“A leader is someone who hears about a conflict and, instead of saying, ‘Oh, that's unfortunate,’ instead says, ‘How can I improve this situation?’ Well done, Dr. Davies, on seeing and seizing an opportunity to do something good and kind,” one fan said.

“I CRIED when this happened! SOBBED,” an admirer opined.

“Beautiful moment. Proud of my Alma mater,” another agreed.