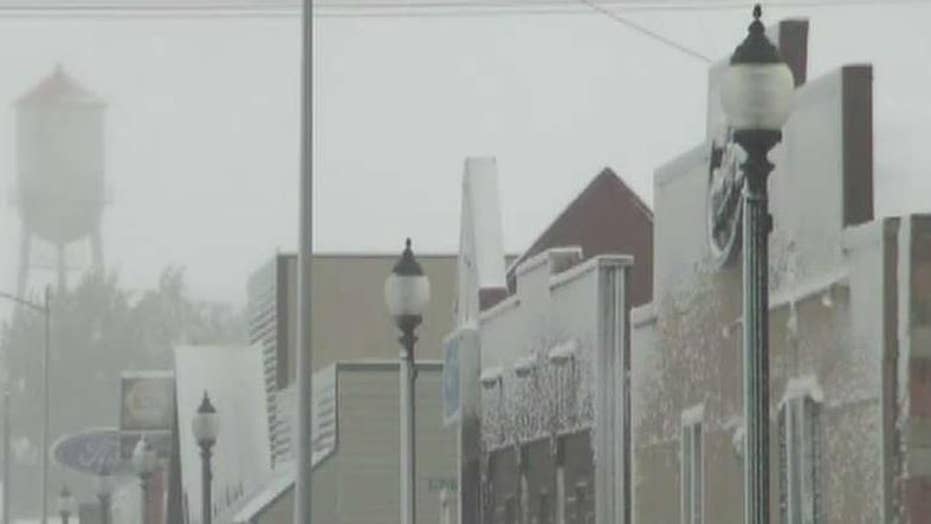 Montana slammed with a foot of snow

A powerful winter storm targeting the northern Rockies has caused power outages and temporary road closures in northwestern Montana as forecasters warn Sunday the early-season wintry blast will drop several additional feet of snow in parts of the region.

The NWS in Great Falls reported 16 inches of snow had fallen near Marias Pass just south of Glacier National Park by early Saturday afternoon, and that by Sunday morning snowfall rates are increasing again across parts of north-central Montana.

"We've already had about a foot and a half; we probably are going to see another couple feet of snow by the time this is done," Fox News Chief Meteorologist Rick Reichmuth said on "Fox & Friends."

Gusty winds on Saturday and Sunday knocked down trees, damaging power lines and leading to scattered outages across northwestern Montana. The Finley Point/Yellow Bay Fire Department shared on Facebook it responded to several tress that fell down on power lines, houses, and across roads by Flathead Lake in northwest Montana.

"Please only travel if necessary. Power outages may be as long as 10 hours or more to be restored," officials said.

NorthWestern Energy reported multiple power outages affecting hundreds of customers across the state in locations such as Bozeman, Belgrade, Billings, Great Falls and Geraldine, according to ABC/FOX Montana.

Emergency travel only was recommended in some areas along the eastern edge of the Rocky Mountain Front and treacherous travel was reported around the region. Montana Gov. Steve Bullock declared an emergency Sunday for areas hit by the early-season snowstorm, which allows the state to mobilize resources to help affected areas.

“Montanans should heed all warnings from state and local officials, travel safely, and be cautious during this time," he said.

A motorist travels along U.S. 287 near Norris, Mont. during a snowstorm on Sunday. (Montana Department of Transportation)

The Montana Department of Transportation warned motorists of severe driving conditions on several roadways, including portions of U.S. 89 and U.S. 2.

Near Browing, officials warned drivers that conditions were deteriorating.

"Blackfeet law enforcement services would remind the public that it is still emergency travel only. Plows are working on the Main highways at this time and vehicles are making it extremely difficult to get them cleared due to being stuck," Blackfeet Law Enforcement Services said on Facebook. "We ask that you remain at home where you are safe. If vehicles are left unattended and causing a road hazard they will be towed.

Whiteout conditions can be seen on Interstate 15 near Sieben, Mont. on Sunday as an early-season winter storm impacts the region. (Montana Department of Transportation)

A semi-truck was also reported to have spun out along Interstate 15 near Cascade, blocking both of the northbound lanes, according to ABC/FOX Montana.

Following the storm, temperatures are expected to drop into the teens and 20s across much of western and central Montana overnight Monday.

The weekend storm system was also bringing strong winds and snow to the mountains of northern Washington and northern Idaho.

In Spokane, Wash., the NWS Spokane office recorded 1.9 inches of snowfall at the Spokane International Airport Saturday. That was the first measurable snowfall recorded on Sept. 28 since records have been taken in Spokane beginning in January of 1881, according to FOX28.

Homeless shelters in the city were relaxing their entrance policies and the city was preparing a backup shelter, if needed.

Dave Wall, a Union Gospel Mission spokesman, said the shelter's director and Spokane's mayor agreed the mission would not enforce its drug and alcohol policies while temperatures were below freezing, as long as patrons weren't acting unsafe, The Spokesman Review reported.