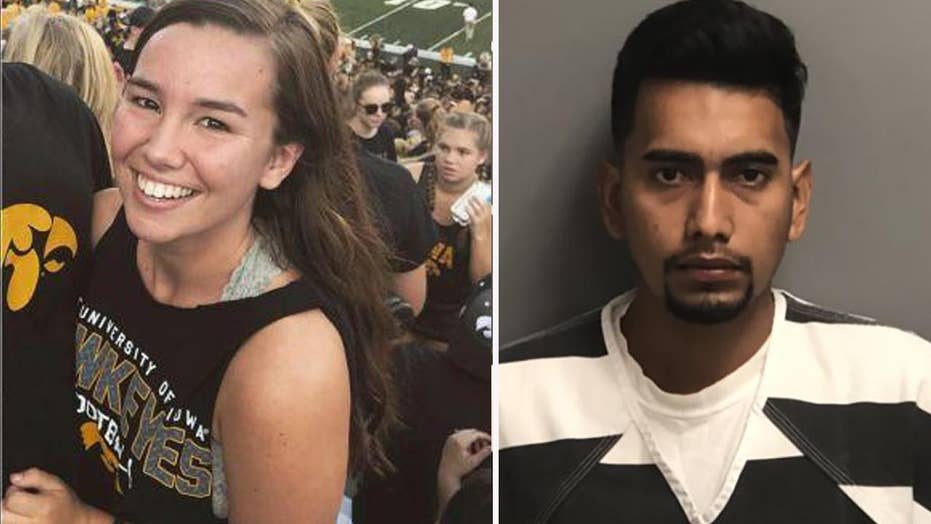 The body of the missing University of Iowa college student Mollie Tibbetts was found bringing an end to the five week search. Murder suspect Cristhian Bathena Rivera was charged with first-degree murder. Here is a timeline of the events since her disappearance.

The suspect in the murder of Iowa college student Mollie Tibbetts is a 24-year-old illegal immigrant from Mexico who had been living in the area for up to seven years, officials revealed Tuesday.

Cristhian Bahena Rivera was apprehended more than a month after the 20-year-old University of Iowa student disappeared, Rick Rahn, special agent in charge with the Iowa Division of Criminal Investigation, said during a news conference. Tibbetts was last seen jogging on July 18 near Brooklyn, Iowa -- in Poweshiek County, where Rivera lives.

A body believed to be Mollie Tibbetts was discovered earlier Tuesday and Rivera led authorities to the location, Rahn said, adding that her body was found hidden in a corn field beneath several corn stalks.

Rivera was employed for the past four years at Yarrabee Farms, a dairy farm, the company confirmed in a statement to The Associated Press. The company said he was in good standing as a worker and was shocked to learn of his alleged involvement in Tibbetts' disappearance and murder.

The suspect told law enforcement he approached Tibbetts while she was running, Rahn said. 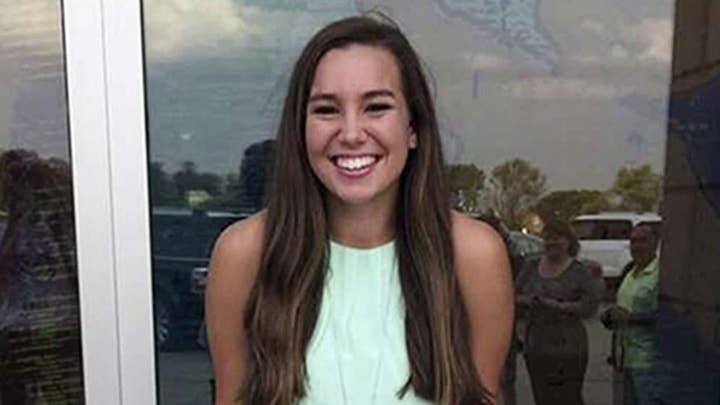 “He actually tells us that he ran alongside of her or behind her. And then at one point, he tells us that Mollie grabbed ahold of her phone and says 'you need to leave me alone, I'm gonna call the police,’” Rahn said of the interview. “And then she took off running, he, in turn, chased her down. And then he tells us that at some point in time he blacks out and then he comes to near an intersection in which we believe he then placed Mollie.”

Rivera revealed to investigators that he became angry when Tibbetts took out her cell phone, according to court documents obtained by The Associated Press. He told authorities that he panicked and “blocked” his memory.

The suspect claimed he didn’t remember what happened next but later realized that he’d put Tibbetts’ in his trunk after finding an earpiece from headphones in his lap, the documents said. He opened the trunk and noticed blood on the side of her head.

Investigators said they believed the suspect had been in the area for four to seven years.

A poster for missing University of Iowa student Mollie Tibbetts hung in the window of a local business on Tuesday in Brooklyn, Iowa. (AP Photo/Charlie Neibergall)

“A first-degree murder charge was filed today in connection with the disappearance of Mollie Tibbetts, who was last seen jogging in Brooklyn, Iowa on July 18, 2018,” Rahn said. “A complaint and affidavit names Cristhian Bahena Rivera, age 24, who resides in rural Poweshiek County and he has been charged with murder in the first degree.”

After Rivera’s arrest, Immigration and Customs Enforcement (ICE) “lodged a detainer with the Poweshiek County Sheriff’s Office” on the suspect, who was described as “an illegal alien from Mexico,” the agency confirmed.

With the help of surveillance video obtained from someone living in the area, law enforcement was able to identify a vehicle belonging to the suspect, Rahn said. Investigators saw Tibbetts on the video and realized that Rivera “was one of the last ones to see Mollie running,” Rahn added.