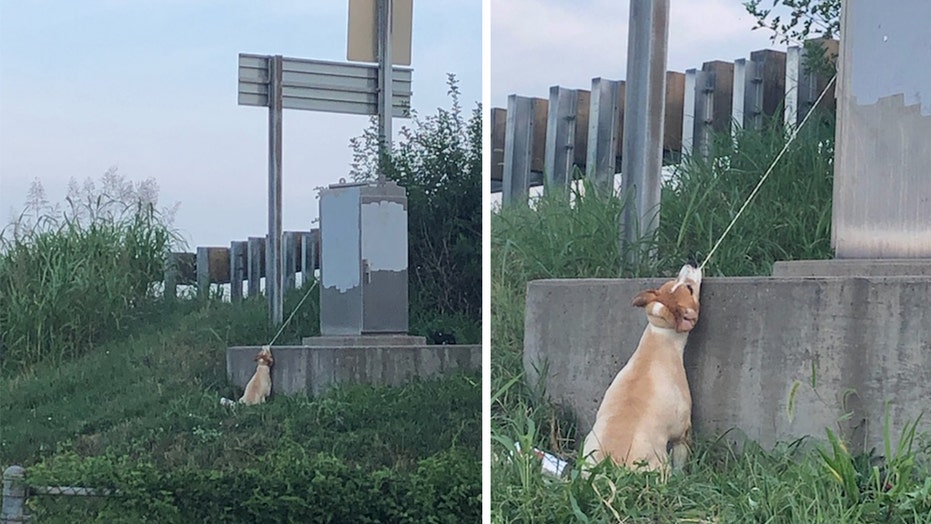 A passing commuter rescued a dog tied to an electrical cord on the side of an interstate overpass in Missouri on Monday.

David Fredman was driving to work on Interstate 70 in Independence when he spotted the dog.

"I saw what looked like a dog that was being hung over the side of some sort of power box,” Fredman told Fox 4 KC. “The cord was definitely strangling him. His feet were touching the ground, but they were barely touching the ground. He was trying to whip his head left and right but could barely move it."

Fredman immediately called 911 and then grabbed his knife.

“The way I found him, I just couldn’t believe somebody would do that to an animal at all," he said. "As soon as I cut him down, he couldn’t breathe. He was trying to breathe. I tried get him to walk. He couldn’t walk."

The shelter discovered the dog was microchipped and his owner had been looking for him since Monday morning when he disappeared from a home about a mile away from where he was found, Fox 4 KC reported.

Within hours the dog was back home with his family, who is now “working hard to find how Max was taken and how he ended up hanging from that box,” the shelter wrote on Facebook. “Thanks to the quick actions by David and the power of a microchip, we were able to get Max back home safely to his family.”

Dee Vaughn, the dog’s owner, said he got a phone call two hours after Max had disappeared asking if the dog was missing.

Vaughn told Fox 4 KC the dog could not possibly have gone so far in just a couple of hours on his own. He said he was horrified when he saw the photo of Max on the side of an overpass.

“Literally you could see the imprint around his neck where they hung him," Vaughn told the station.

Vaughn invited Fredman to his home on Monday after they both got off work to thank him for finding and helping his dog.

“Thank you, David, so much," Vaughn told Fredman. "You stopped what you were doing to turn around and save my dog’s life."