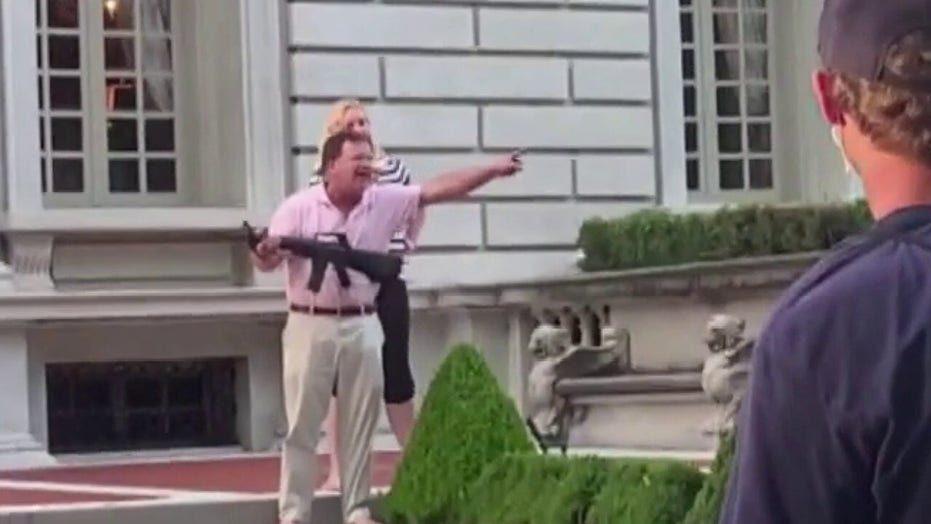 St. Louis Circuit Attorney Kim Gardner, the city’s top prosecutor, said Mark and Patricia McCloskey – both personal injury attorneys in their 60s – will be charged with felony unlawful use of a weapon following the June 28 incident.

"It is illegal to wave weapons in a threatening manner -- that is unlawful in the city of St. Louis," Gardner said in a statement. She added that she was recommending a diversion program as an alternative to jail if the McCloskeys are convicted.

Armed homeowners standing in front of their house along Portland Place confront protesters as they march to Mayor Lyda Krewson's house on Sunday, June 28, 2020, in the Central West End in St. Louis.  (Tribune News Service via Getty Images)

Gardner declined to discuss to why Missouri’s “castle doctrine,” a law that justifies deadly force for those who are defending their homes from intruders, didn’t apply.

Within hours of the ruling, Missouri Attorney General Eric Schmitt filed a brief seeking to dismiss Gardner’s charges against the McCloskeys on the grounds that their Second Amendment rights are being violated.

“The right to keep and bear arms is given the highest level of protection in our constitution and our laws, including the Castle Doctrine, which provides broad rights to Missourians who are protecting their property and lives from those who wish to do them harm,” Schmitt said in a prepared statement provided to Fox News.

“Despite this, Circuit Attorney Gardner filed suit against the McCloskeys, who, according to published reports, were defending their property and safety. As Missouri’s Chief law enforcement officer, I won’t stand by while Missouri law is being ignored,” Schmitt said.

The brief filing says the attorney general “respectfully requests that the Court dismiss this case at the earlier possible opportunity.”

The McCloskeys have said they were defending themselves, with tensions high in St. Louis amid nationwide police protests sparked by the police custody death of George Floyd. The McCloskeys said that the crowd of demonstrators broke an iron gate marked with "No Trespassing" and "Private Street" signs and that some violently threatened them.

An attorney for the couple, Joel Schwartz, called the decision to charge "disheartening as I unequivocally believe no crime was committed."

Supporters of the McCloskeys said they were legally defending their home.

Several Republican leaders have condemned Gardner's investigation, including President Trump, Missouri Gov. Mike Parson and Sen. Josh Hawley, who has urged Attorney General William Barr to undertake a civil rights investigation of Gardner. Parson said in a radio interview Friday that he would likely pardon the couple if they were charged and convicted.