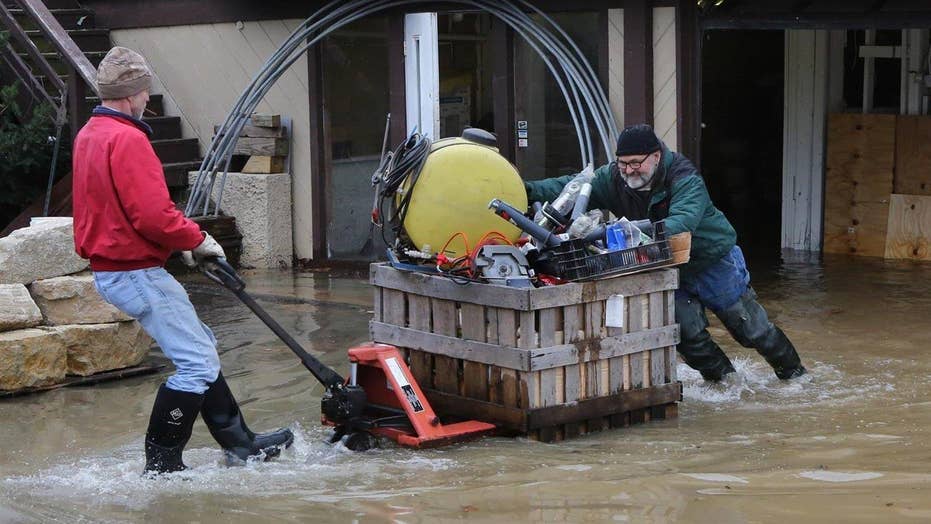 Worst yet to come for Missouri towns threatened by flooding?

The levee in the far southwestern tip of Illinois protects the towns of Olive Branch, Hodges Park, Unity and rural homes. All told, about 500 people live behind the levee.

Alexander County Board Chairman Chalen Tatum said the river was expected to rise another foot and a half before cresting Sunday, so flooding was expected to get much worse. He issued what he called an emergency evacuation order Friday.

The county also urgedresidents in and near East Cape Girardeau, Illinois, to evacuate. The move is precautionary: A levee there is holding for now but a record crest is predicted.

Crests are still expected in coming days in southern Missouri, Arkansas, Tennessee and other southern states.

But elsewhere, water from the rare, record-setting winter flooding was receding in the St. Louis area, allowing some major roadways to reopen and offering hope for flood-weary residents that the worst of this sudden catastrophe was behind them.

With water finally going down, the Missouri Department of Transportation was able to reopen northbound lanes of Interstate 55 south of St. Louis on Thursday, about a day after they were closed, and southbound lanes opened Friday morning.

Interstate 44 was also opened in both directions, and all interstates in Missouri are now open to traffic, the Missouri DOT said.

MoDOT spokeswoman Shaunda White said 76,000 vehicles pass through that area on a typical day, "so that's going to be a significant relief."

The devastating flood, fueled by more than 10 inches of rain over a three-day period that began last weekend, is blamed for 20 deaths. Four other people are still missing — two teenagers in Illinois and two men in southwest Missouri.

In Ste. Genevieve, Missouri, south of St. Louis, the Mississippi was still rising but there was good news: The crest forecast for late Friday or early Saturday, once expected to be a record, was now expected to fall about 2 feet short of the 1993 mark. Many downtown merchants had cleared out, just to be on the safe side, in case the levee gave way.

"We are breathing a bit easier," said Sandra Cabot, director of tourism for the historic French settlement that dates to the 18th century. "We are very confident in our levee. We've never been tested at this level before."

Nine levees — five on the Mississippi River, three on the Missouri and one on Illinois' Kaskaskia River — were topped by water this week, but those earthen barriers protect farmland and otherwise unpopulated areas.