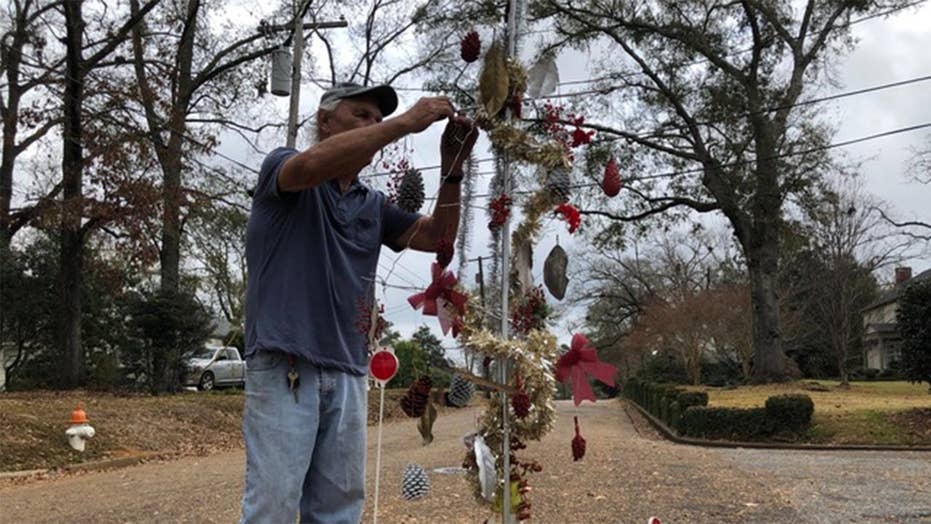 A Mississippi neighborhood is having fun with a pothole that's been sitting on their street, adding some holiday cheer with a makeshift Christmas tree.

MCCOMB, Miss. — People living in McComb, Mississippi, have added street work to their Christmas lists after they said the city left them with a gaping pothole, and now they’re using holiday cheer to bring some attention to it.

At the corner of North James Avenue and North Street, the pothole has been serving as the base for a makeshift Christmas tree. John Drummond said the tree — made of a metal rod sitting inside of a traffic cone — originally was supposed to be a deterrent for the cone, which had been knocked all over the neighborhood after city workers dug up the street and placed it over the pothole.

“For a couple of days, the cone stayed in the hole. Then, people starting knocking it all up and down everywhere,” Drummond said. “I saw a Christmas tree on TV and said, ‘imma put one of those out there in that cone and everybody can like it and not hit the pothole.’”

From there, the makeshift tree took on a life of its own. Neighbors in the Edgewood community would come and add silver, red and gold pine cone ornaments. Others added silver and gold garland to the metal tree. Cyrena Austin added lights for the ultimate festive feel.

John Drummond checking on the makeshift Christmas tree he placed over a pothole on the street where he lives in McComb, Mississippi. He and neighbors said they decided to decorate the tree to get the attention of city officials. (Fox News/Charles Watson)

“The lights came on like the second day after John had it up,” Austin said. “All of sudden it’s like people got into it and that’s what we have now.”

Aside from wanting their street repaired, Austin said the tree became a way to ensure the pothole didn’t cause a holiday headache for drivers who could have run right over it. It’s not uncommon, according to AAA, which estimated Americans have shelled out anywhere between $250-$1,000 for damage caused by potholes—about $3 billion annually.

“The worst thing was, if two cars came by, somebody was going to hit the pothole,” Austin added. “We just hated seeing that people were going to damage their cars, possibly.”

Otherwise, the tree has been a sight to see for people driving through McComb. Some passersby stopped to take photos so they could share it with friends and family through texts and social media.

“I just wanted to come out and take a picture to share with my brother in Nashville, Tennessee,” Watkins Wise said. “I think it’s pretty funny.”

Presents underneath the makeshift Christmas tree in McComb, Mississippi. Residents placed the tree inside the pothole in the hopes of getting it fixed. (Fox News/Charles Watson)

Filling potholes with Christmas trees wasn’t unique to McComb. Last month, people in an Atlanta neighborhood filled a pothole on their street with a light-filled Christmas tree in hopes of galvanizing city officials to fix the issue. People in Jackson, Miss., did something similar in 2017 when a pothole opened up on their street.

Fox News reached out to the McComb mayor’s office to inquire about when the pothole would be fixed. The mayor's office deferred to the city’s streets department, which did not respond.

Drummond, who has visited the makeshift tree sitting in the pothole, said he hoped it would be on the city’s radar, at least. If not, he and his neighbors have been having fun with the tree anyway. He said maybe they’ll be doing something different for New Year’s.

“We’ll come up with something,” he said. “Maybe the city will come before then and we won’t have to deal with it.”