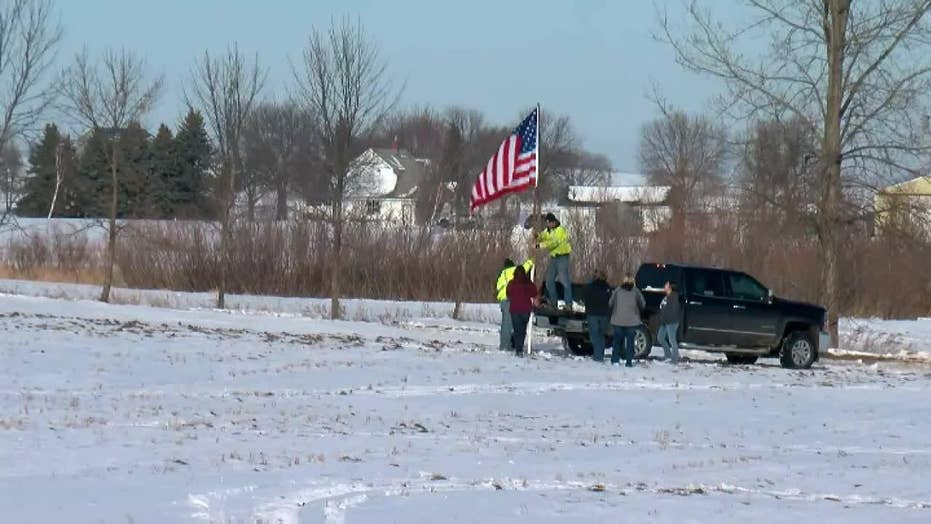 Raw video: The landowners where the helicopter crash took place raised an American flag in honor of the three soldiers who died.

An American flag was raised near the site of Thursday's deadly National Guard helicopter crash in Minnesota, as military officials identified the three men who died.

One of the victims was the chief pilot of the helicopter, another was a co-pilot and the third victim, Plantenberg, was a crew member. The Minnesota National Guard is not yet saying which victim filled the chief pilot role, Maj. Gen. Jon Jensen said in a news conference Saturday.

Jensen stressed that his unit's main priority was to support the families in their time of grief. "We send the message that the chain of command is here to support the whole unit," he said.

All three soldiers were assigned to Company C, 2-211th General Support Aviation Battalion, which was based in St. Cloud, according to the National Guard.

"They paid the ultimate price in their service to Minnesota and to the United States of America. Words will never ease the pain of this tragic loss and the state of Minnesota is forever in the debt of these warriors," he added.

According to the Minnesota National Guard, all three soldiers returned from a nine-month deployment to the Middle East in May, where they conducted medical evacuations to support Operation Spartan Shield and Operation Inherent Resolve.

The Black Hawk helicopter crashed southwest of St. Cloud on a property belonging to the Krippner family, which runs an excavating business with a gravel pit.

On Friday, members of the family raised an American flag near the crash site.

“We just want them to know we support them and stand behind them. Thank you for serving our country,” Kurt Krippner told WCCO-TV.

Walz declared the state in mourning and all flags to be lowered to half-staff in honor of the three fallen soldiers and their "dedicated service" until Monday.

The investigation of the crash is underway by the Safety Investigation Team from the U.S. Army Combat Readiness Center based in Fort Rucker, Ala.

The outlet reported that the soldiers were conducting a maintenance test flight when the helicopter crashed shortly after takeoff.