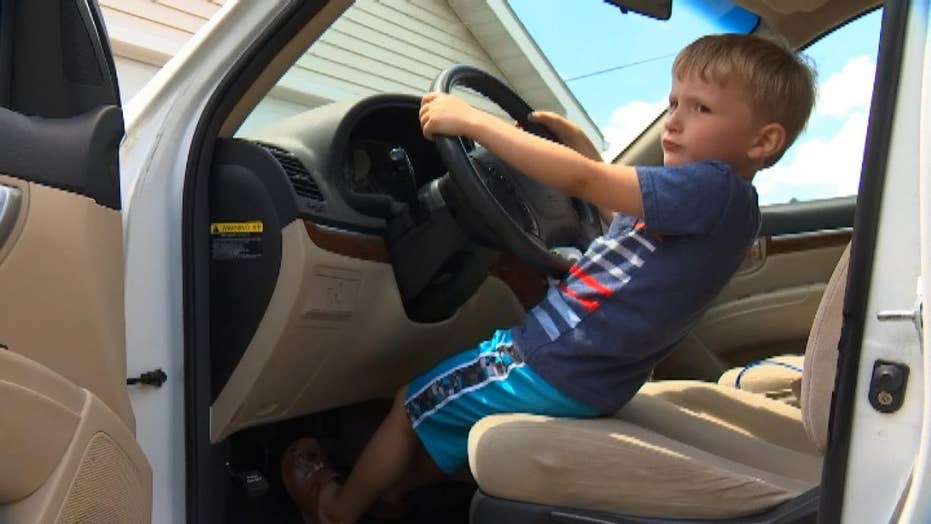 Mischievous Minnesota boy takes his great-grandfather's vehicle on a mile-and-a-half trek to a gas station to buy candy.

The mixture of peanut butter and chocolate is an unrelenting mistress.

A 4-year-old Minnesota boy with a hankering for some candy on Tuesday apparently couldn't wait to get the sweet treats, and instead took matters into his own small hands, "borrowing" his great-grandfather's vehicle for a ride to satisfy the yearning.

The Blaine Police Department said the incident happened around 8:30 a.m., when the boy, named Sebastian, got behind the wheel of his grandfather's Hyundai Santa Fe and took off -- even though he could barely see above the steering wheel.

After leaving his great-grandfather's house, Sebastian drove through some neighborhood streets before turning onto the busy University Avenue during the morning rush hour.

"To the gas station because I wanted to have Reese's," the four-year-old told FOX9.

Sebastian shows how he got behind the wheel of his great-grandfather's SUV and took it for a joyride. (FOX9)

Witnesses told police the SUV was driving erratically at speeds of 10-to-15 mph before pulling into a gas station parking lot, where authorities quickly met him.

“It could’ve been very serious,” Sebastian's great-grandfather Roy Becker told FOX9. “He could’ve hit a car. He wasn’t wearing a seatbelt. We could be talking about a funeral.”

Along the way, several mailboxes were destroyed and the vehicle clipped a tree, which broke off a piece of the bumper onto a neighbor's lawn. Officials said that no one was injured during the joy ride.

The 4-year-old showed FOX9 how he was able to get behind the wheel by using his great-grandfather's walker to grab the keys from wall hooks, and then climb into the driver's seat, driving off when no one was looking.

Damage to the great-grandfather's vehicle can be see after the joyride to get candy. (FOX9)

“He watches everything people do and he’ll repeat it,” Becker said.

Sebastian mother, Jenna Swenson, said her reaction to the incident could best be described as "panic, anxiety.”

“A little of almost all the emotions going on, trying to calculate what happened," she said Wednesday.

Family members said going forward, they plan to lock up the keys in the future and keep a closer eye on the 4-year-old.