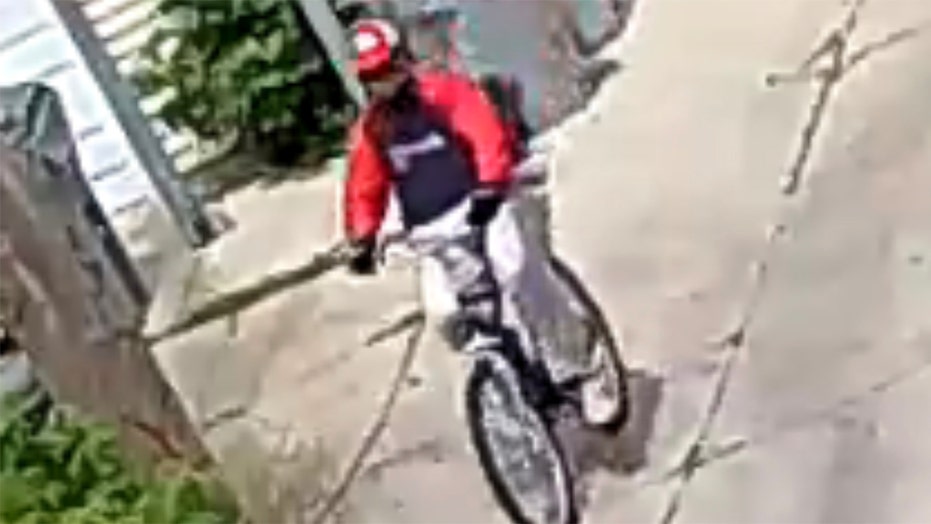 Milwaukee police have released photos of a suspect in the shooting death last week of a Rastafarian community fixture who was a supporter of President Trump.

Bernell Trammell, 60, was killed Thursday afternoon, shocking those who knew him as a peaceful man. The murder prompted calls from leading Wisconsin Republicans for a federal probe to determine if the killing had to do with his politics.

Trammell was shot in front of signs he had put in a storefront window expressing his support for Trump’s reelection.

Milwaukee police have made no arrests in the case.

The photos were taken from surveillance cameras near Trammell’s storefront.

Police said the man being sought was a 200 pound 6-footer in his 30s. The photos show him wearing a white and red baseball cap, a black mask covering the lower portion of his face, a black and red long sleeve shirt with white writing on the front, white or light-colored pants, black socks and white shoes.

Image shows the person police say is was wanted in the shooting of Bernell Trammell, a Rastafarian community fixture in Milwaukee who supported the reelection of President Trump. (Milwaukee Police Department)

Two of the photos show the man riding a bicycle, which police said was his "mode of transportation."

Trammell was often seen carrying around handmade signs about politics and religion — and was ready to engage passersby in conversation, the Milwaukee Journal Sentinel reported Monday.

Bernell Trammell, 60, was a familiar figure in the Milwaukee neighborhood where he lived. (Facebook)

Wisconsin GOP Chairman Andrew Hitt issued the call for a federal probe saying with the general election 99 days away and a primary in two weeks, it is imperative that the community knows if Trammell's murder was politically motivated,

Sen. Ron Johnson, R-Wis., offered condolences to Trammell's family in a tweet that also said, "I hope they get answers and justice soon," WISN-TV reported.