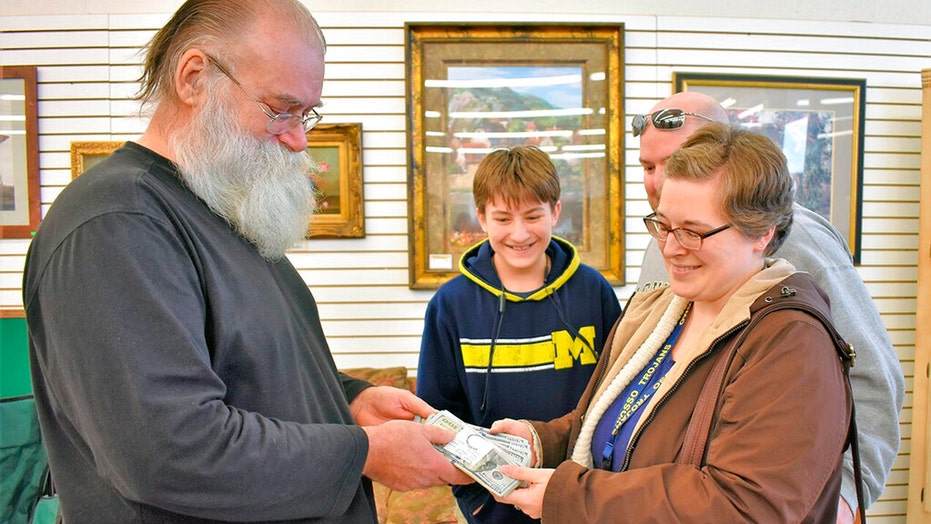 Howard Kirby got the surprise of his life last month when he found over $43,000 in cash inside a couch he'd purchased at the Habitat for Humanity ReStore in Owosso, Michigan.

“It still boggles my mind every so often,” he told CBS 5 on Thursday.

Kirby purchased the couch to outfit his man cave but said the ottoman felt odd and uncomfortable. His daughter eventually unzipped the cushion to examine it further and discovered stacks of hundred-dollar bills.

“That’s when she started pulling out this,” Kirby told the station, holding up a fistful of cash. “I still have to pinch myself to make sure I’m not dreaming or something,”

In this Jan. 16, 2020 photo, Howard Kirby, left, gives $43,170 to Kim Fauth-Newberry at a resale store in Owosso Township, Mich.. Kirby's daughter-in-law found the money in a footstool that was donated to the store by Fauth-Newberry. The footstool had belonged to her grandfather, who died last summer. Kirby bought it along with other furniture after Christmas. (Sally York/The Argus-Press via AP)

A total of $43,170 was found inside the couch, but Kirby didn't feel morally right keeping it. He went back to the store to seek out the original owner and tell them about the cash.

Kim Fauth-Newberry came into possession of the couch after her grandfather, the original owner, passed away last year. She said she had no idea there was money inside when she gave it away.

The ReStore surprised her on Thursday by calling her down to the shop and returning every last dime that Kirby had found.

Kirby had reportedly sought legal advice about his rights to the money and was told that he was under no obligation to return it. Despite having the legal right to keep it, he thought giving it back was the right thing to do.

Store manager, Rick Merling, praised Kirby for leading by example and putting the needs of someone else above his own.

Kirby claimed he could have used the money for a new roof but is happy the cash has found its way back to the original owner.

“I always thought, 'What would I do if that ever happened?' Now I know," he said. "And it makes me feel good."