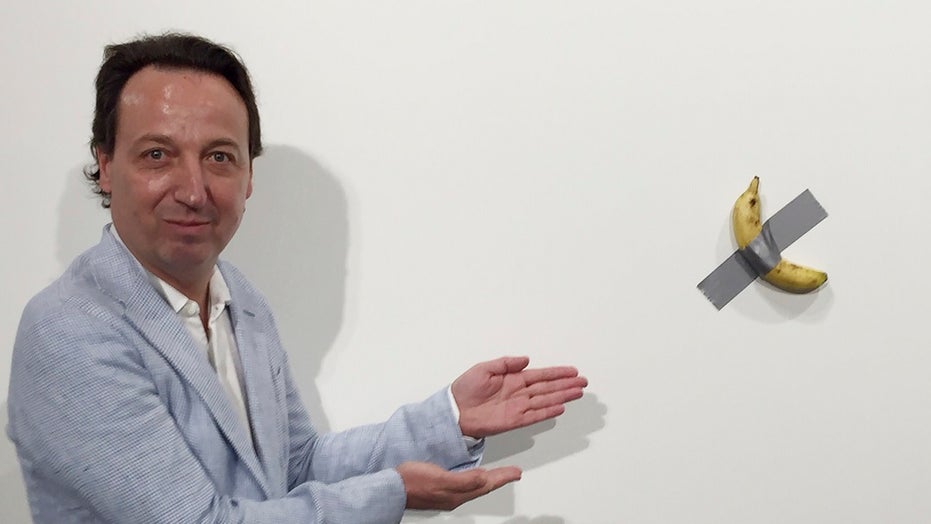 The Miami couple who purchased a much-talked-about piece of art consisting of a banana duct-taped to a wall for $120,000 acknowledged the absurdity of the artwork and said they plan to gift it to a museum.

Billy and Beatrice Cox said they believe the artwork, titled "Comedian," will become "iconic." They spent the money after seeing "the public debate it sparked about art and our society.”

"We are acutely aware of the blatant absurdity of the fact that 'Comedian' is an otherwise inexpensive and perishable piece of produce and a couple [of] inches of duct tape,” the Coxes said. “Ultimately, we sense that [artist Maurizio] Cattelan’s banana will become an iconic historical object.”

In this photo, gallery owner Emmanuel Perrotin poses next to Italian artist Maurizio Cattlelan's "Comedian" at the Art Basel exhibition in Miami Beach, Fla. The work sold for $120,000. A Miami couple who bought a headline-grabbing banana duct-taped to a wall say they acknowledge the absurdity of the artwork, but believe it will become an icon and plan to gift it to a museum. (Siobhan Morrissey via AP)

They plan to loan and eventually gift the banana to an unspecified art museum.

“Yes... the banana itself will need to be replaced,” they acknowledged.

The expensive piece of produce was the talk of the Art Basel Miami festival last week, with critics lambasting the conceptual artwork by Italian artist Maurizio Cattelan as evidence of wealth inequality.

Some reasoned they could easily recreate Cattelan's work with a trip to the grocery and hardware stores. Parodies even sprung up online, such as the framed bagel with a piece of duct tape over it by Kelly Ripa and Ryan Seacrest.

On Saturday, performance artist David Datuna removed the lastest edition of the banana from the wall and proceeded to unpeel and eat it, much to the public's shock.

"I respect Maurizio, but it’s art performance: Hungry artist,” he had said.