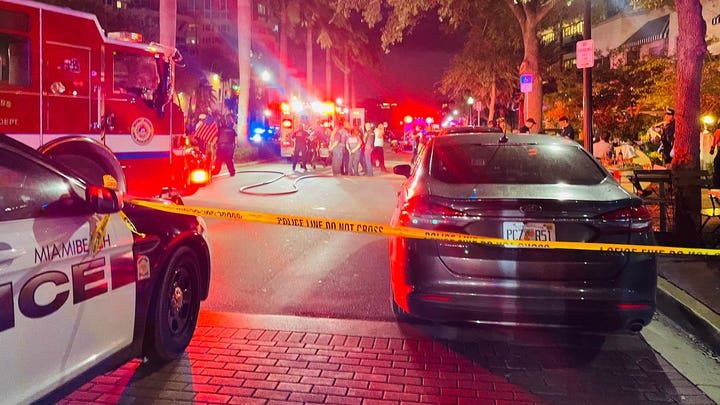 One person died and six others were hospitalized when an "elderly woman" botched her parallel parking attempt and revved her car into an outdoor café in Miami Beach Thursday night.

"Preliminary information gathered indicates an elderly woman was attempting to parallel park, but accelerated onto the outdoor cafe area of the restaurant," Miami Beach police told Fox News Digital. "The woman struck several tables resulting in 7 patients being transported to the hospital. Unfortunately, one of the patients transported has died at the hospital."

It happened at Call Me Gaby, a boutique pizza restaurant, on Washington Avenue during the dinner rush.

Videos taken from a high-rise apartment above the scene show a massive police presence, with dozens of flashing lights up the block, as well as firetrucks and ambulances.

It happened at Call Me Gaby, a boutique pizza restaurant, during the dinner rush, according to authorities. (Miami Beach Police)

"This care just jammed into the tables and the restaurant," said a woman recording the video. "And all the cops have been coming running within 30 seconds of what we heard to be an explosion."

There was no smoke or flames in the video however. When she zoomed in, it showed the car had backed onto the sidewalk with the front bumper near the street.

Authorities closed the road between South Point Drive and 1 Street during their investigation.

A second video showed the huge police presence remained at the scene after sundown.

The restaurant did not immediately respond to a request for comment.