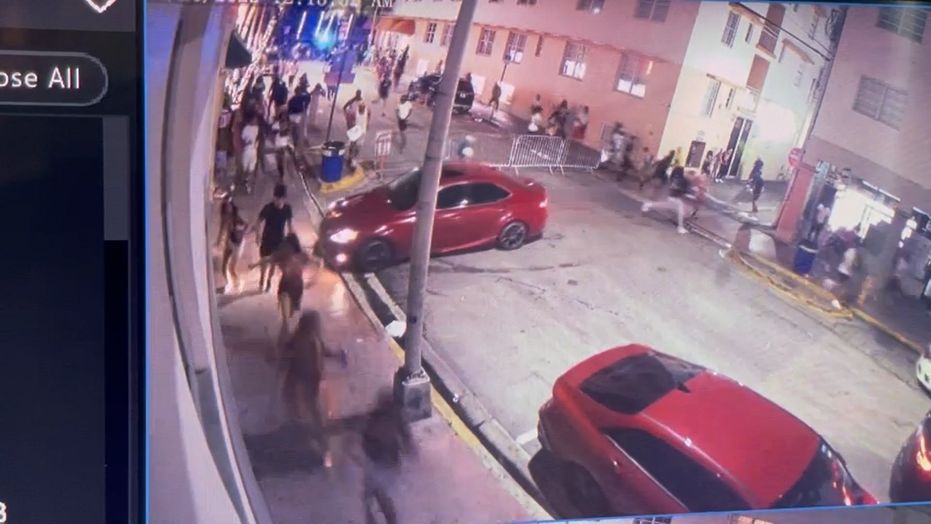 MIAMI BEACH, Fla. – Miami Beach is packed with visitors from around the country – and the world – as spring break aligns with a major dance music festival, at the same time city officials declared a state of emergency over a spike in violence.

"Certainly, the guns that are here didn’t come on an airplane, so we know much of the worse conduct is coming from people who live somewhere near South Florida," Mayor Dan Gelber told reporters during a news briefing.

He’s talking about a lot of guns – at least 100 seized in the past five weeks during the spring break season in addition to two shootings earlier this week that left five people injured in the heart of South Beach’s Ocean Drive nightlife scene.

The pair of shootings prompted city officials to impose a curfew for South Beach in a bid to stop the violence.

Separately, police said they’d arrested 618 people between the start of the season and March 20. Sunday was also the busiest day in history at Miami International Airport, a spokesperson told Fox News Digital.

"Since Feb. 18, which is when we amplified staffing, more than 50% of citywide arrests were of people who reside in Miami-Dade County," a Miami Beach Police spokesperson told Fox News Digital.

One of them is 19-year-old Derrick Mitchell, a resident of nearby Hialeah who police accuse of injuring two women during a shootout on Ocean Drive around 1 a.m. Monday. The other gunman remains at large.

A day earlier and just a block away, three other people were wounded in another shooting. Police said they were still investigating Thursday and could not announce any arrests.

Fox News Digital witnessed three arrests in as many hours Tuesday night, after the city declared a state of emergency, but before the curfew was scheduled to go into effect.

One involved a blue Dodge Charger speeding down Ocean Drive, allegedly weaving from lane to lane with a passenger hanging out of the window, all with throngs of pedestrians packing the bar and restaurant lined sidewalk.

Of the five people inside, who police initially handcuffed at 14th Street and Collins Avenue, two were taken away in separate squad cars. The other three were released at the scene.

Police documents identify the detained men as a 21-year-old driver from Brooklyn, New York, who was charged with reckless driving, and a 19-year-old who police said provided a fake ID.

"As officers approached the vehicle, the occupants of the vehicle became irate and belligerent," a police report reads. One of them allegedly reached for an unidentified object, prompting police to draw their weapons, but the incident came to a conclusion without any injuries.

Just two blocks away later in the evening, patrons at a crowded restaurant helped apprehend an armed teen after a security guard said he saw it in his waistband.

A customer told police he saw the suspect walking toward him on 11th Street and that the 15-year-old lifted his shirt, revealing the weapon. Based on his approach and the way he allegedly flashed the gun, the man, who was wearing a large gold chain, told police he believed he was about to be robbed.

He confronted the teen and a security guard recovered the gun, according to a police report. When police arrived, they took control of the scene and eventually discovered the gun had been reported lost just five days earlier on March 17.

The suspect, from Miami Gardens, faces a felony charge of concealed carry of a firearm.

The curfew is an attempt to reign in the chaos after violence shocked the tourist hot spot, where international travelers and Americans have flocked this week for spring break, the nearby Ultra music festival and the beautiful oceanfront beaches.

But it also reveals the difficulty local police face trying to both protect the mix of visitors, locals and businesses while playing the side role of public relations on behalf of the community, according to Betsy Brantner Smith, a former police sergeant and spokesperson for the National Police Association.

On top of that, she added, "criminals, whether it’s gang members or drug dealers or whoever, they go on vacation too. And a lot of them drive in there carrying firearms."

One business owner on Washington Avenue, who asked to remain anonymous out of fear of scaring away customers, told Fox News Digital that the annual spring break crowd has gotten larger and rowdier over the 15 years she’s been in business at that location.

"Spring break was more like young kids coming to have a good time," she said. "During these times, you’ve got hotels that don’t even want to rent…Things changed. They’re carrying guns around."

And the arrival of spring breakers also attracts other people, she said – including nonstudents who are college aged, panhandlers and more. Last Sunday, she said, two apparent bums broke out brawling out in front of her store over a stolen wallet.

It took more than a half hour for police to arrive, she said, because they had their hands full a few blocks away.

To assist with enforcement, city police have asked for and received additional resources from Miami-Dade County.

Authorities told Fox News Digital that those resources may include help with traffic enforcement, K-9 units and the county police helicopter.

Even before the curfew took effect, however, things looked to be slowing down. After Tuesday’s wild night, Wednesday saw dramatically smaller crowds. Open parking spaces were visible on many streets.

One Ocean Drive doorman said it looked like the slowest night since spring break season kicked off in February.

Staff at the Clevelander bar, a major part of the South Beach nightlife, said they expected to lose money due to the curfew but weren’t opposed to going home early.

Nearby, police pulled over a young man driving a car with Georgia plates. They wrote him a ticket for an unspecified traffic infraction, "not speeding," and he drove off.

By 11 p.m., many bars and restaurants were closed and people had begun clearing out, some of them congregating around the few places that still had the music playing.

When asked where everyone had gone, one police officer looked up and down the street and joked, "Don’t jinx us."

Due to differing schedules at schools around the country, the spring break season can span two to six weeks in destination cities like Miami Beach, from mid-February to the end of March.