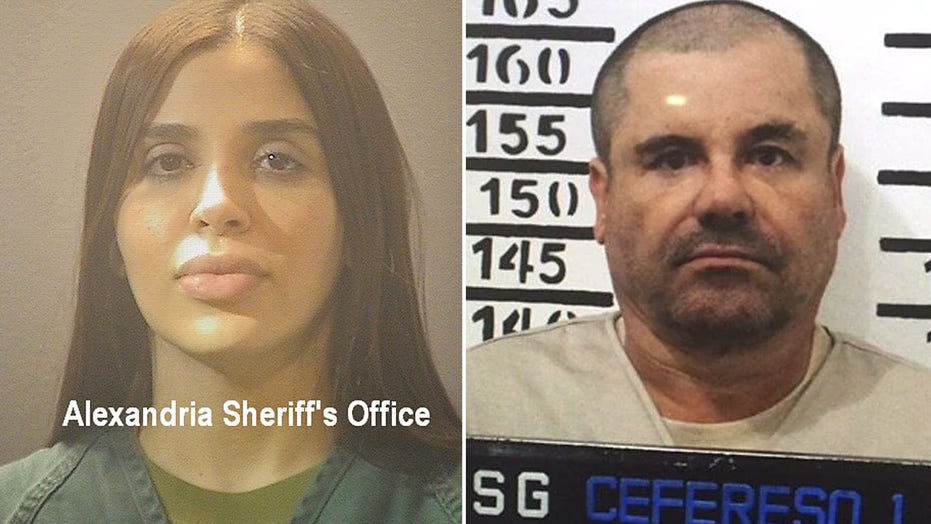 The wife of notorious Mexican drug kingpin Joaquin "El Chapo" Guzman pleaded guilty to federal charges in a Washington, D.C., court on Thursday, in connection with allegations she helped her husband run his multibillion-dollar criminal empire.

Emma Coronel Aispuro appeared in District of Columbia court for a plea agreement hearing related to three felony charges, including a single charge of conspiracy to distribute cocaine, methamphetamine, heroin and marijuana in the U.S.  Coronel wore a green prison uniform and a white face mask and spoke through an interpreter during the hearing, when she entered her guilty plea.

She previously had pleaded not guilty to the allegations, which linked her to crimes committed by her convicted drug-lord husband, nicknamed "El Chapo."

Coronel now would face up to life in prison for a single county of conspiracy to distribute heroin, cocaine, methamphetamine and marijuana in the U.S., which carries a mandatory minimum of 10 years in prison. She also would face up to 20 years in prison for conspiracy to launder money and another 10 years for engaging in transactions of property related to a designated foreign narcotics trafficker.

She also faces fines totaling more than $10 million. Her sentencing has been scheduled for September 15.

EL CHAPO: WHAT TO KNOW ABOUT CONVICTED DRUG KINGPIN

Coronel was arrested this past February at Dulles International Airport in Virginia and has been in law enforcement custody ever since. She also has been accused of helping her husband escape from a maximum-security prison in Mexico.

Guzman and Coronel, 31, have been together since at least 2007, and have twin daughters who were born in 2011. She is a former beauty queen who is more than 30 years younger than her husband.

As Mexico’s most powerful drug lord, Guzman ran the Sinaloa cartel, responsible for smuggling cocaine and other drugs into the United States during his 25-year reign, prosecutors have previously said. They also said his "army of sicarios," or "hit men," was under orders to kidnap, torture and kill anyone who got in his way.

Prosecutors had alleged in February that Coronel "worked closely with the command-and-control structure" of the Sinaloa cartel and conspired to distribute large quantities of drugs, knowing they would be smuggled into the U.S.