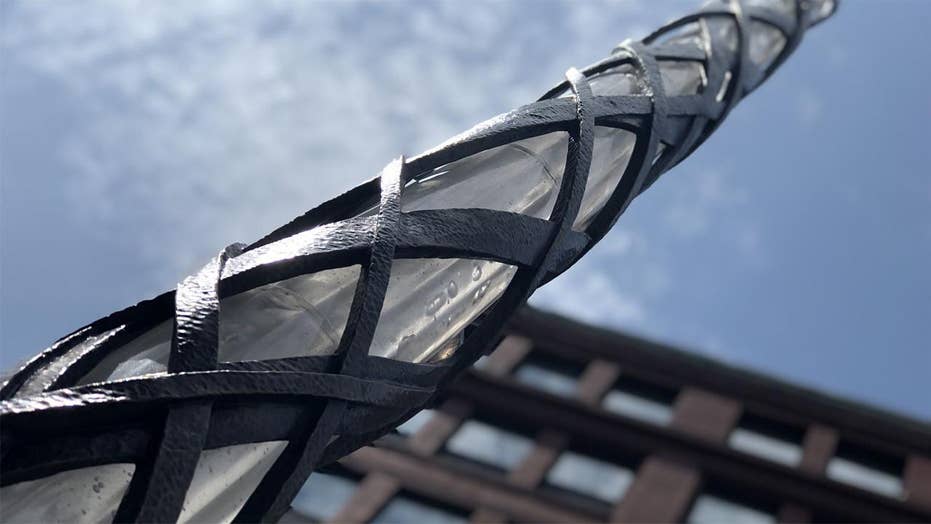 New memorial honors the victims of the 2013 Boston Marathon bombing

The memorial consists of four glass and metal columns at two sites, one at the marathons finish line where the first bomb detonated, the other a block away marking where the second bomb went off.

BOSTON — Construction of a memorial that honors the victims of the 2013 Boston Marathon bombing is nearing completion.

Workers have installed four bronze columns at both explosion sites along the marathon route, symbolizing the lives the Tsarnaev brothers stole in the attack – Martin Richard, 8, Lu Lingzi, 23, Krystle Campbell, 29 – in addition to MIT campus police officer Sean Collier, 26, who one of the brothers later shot after stealing his gun.

One of four columns of the memorial stands over Boylston Street at the exact location where one of the pressure cookers detonated. (Rob DiRienzo / Fox News)

“It symbolizes the way we protect our ideas," Eduardo said. "How we cherish things that are very fragile.”

Carlos Arredondo, dubbed "the hero in the cowboy hat," said returning to the finish line has gradually gotten easier with time.

"It's a healing process," Arredondo said. "I just hope people will understand the meaning behind this memorial."

Right before the blast in 2013, Arredondo was handing out American flags to runners crossing the finish line. Moments after the first pressure cooker detonated, he sprang into action, lept over a fence and extinguished the flames from a man who had just lost both of his legs.

Carlos Arredondo helps first responders rush a man who lost both of his legs in the 2013 blast to safety. Arredondo was later hailed a hero for his quick actions. (Associated Press)

Arredondo was there that day handing out the flags in honor of his two sons – U.S. Marine Lance Cpl. Alex Arredondo, who was killed in Iraq in 2004, and his brother Brian who committed suicide in 2011. He recalls at the end of the day pulling from his back packet a blood-soaked American flag, something he cherishes to this day.

Since the attack, he has launched an organization with his wife Malida to provide assistance to families of service members who commit suicide. He said what he witnessed that day has shed light on what service members often go through, informing his work with the foundation.

Last year, he ran in the race for the very first time.

"The scars, you know, PTSD, flashbacks, many of us are still going through that," Arredondo said, adding that the new memorial will help the healing process. "The families can continue grieving and we're here to also grieve along with them."

Carlos Arredondo and his wife Malida inspect the work underway on the memorial near the finish line.   (Rob DiRienzo / Fox News)

In addition to the four columns at both sites, three granite monuments engraved with poetry will also mark where the three blast victims died. The planning process took more than four years, $2 million, and at the request of the victims' families, a complete redesign to reflect their input, WBZ-TV reported.

Arredondo, who immigrated from Costa Rica in 1980, said people still stop him on the street and thank him, especially when he's donning his cowboy hat. He insists though, that he did that day what any true Bostonian would do.

"They might call me a hero, and I say 'thank you very much,' but that's how we are in Boston," he said. "It's a wonderful legacy here."

The city expects the electrical work to wrap up on the columns over the next few days.