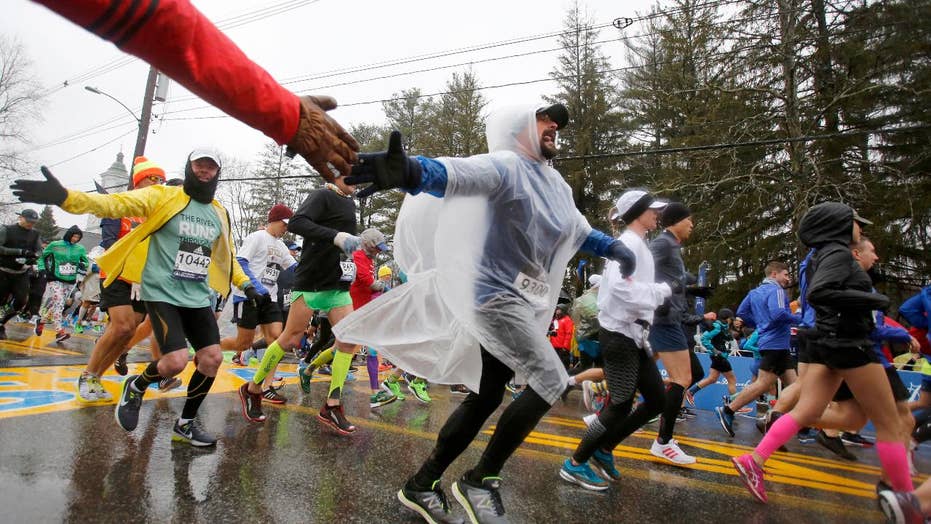 Runners anticipate the start of the 122nd annual Boston Marathon; Rick Levanthal has more on the race from the finish line in Boston, Massachusetts.

In Boston, they call days like this “wicked stormy.”

In fact, there’s never been a day quite this bad in the history of the Boston Marathon.

It was the coldest April 16th here since 1881, with temperatures in the high 30’s at the start of the 122nd running of the Boston Marathon. Winds are gusting 25 to 40 miles per hour, right in the faces of the nearly 30,000 runners as they began the course in Hopkinton, Mass., swamped by sheets of driving rain.

The awful conditions make the 26.2 mile course even more challenging for participants, many wearing extra ponchos, face masks and cover-ups for the grueling journey to Boston’s Back Bay.

Charley, a 44- year-old runner from San Francisco, ran the Boston Marathon for the third time on Monday and managed to shave 20 minutes off his best finish ever.

“There were torrential downpours, it was cold and I could feel my muscles cramping” he told Fox News. “It was pretty nasty but last year was worse" because of unseasonably warm temperatures that reached in the 70s. 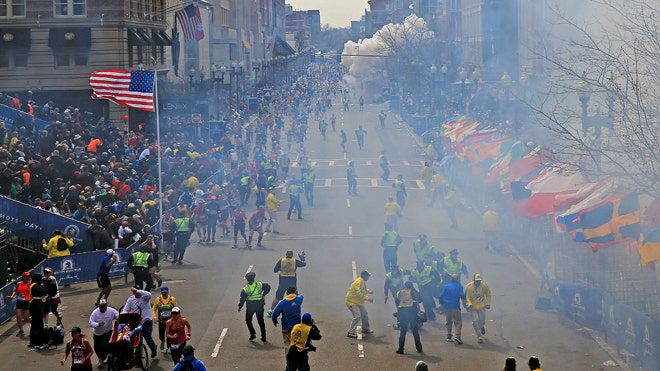 Competitors and race organizers were crying as they fled the bloody chaos. There were at least two bombs and three deaths.

He said he’ll run next year, “rain or shine”.

Known in Massachusetts as Patriots Day, Marathon Monday is typically a festive occasion. But in recent years it’s taken a much more serious and somber turn.

Sunday marked the fifth anniversary of the 2013 bombings that killed three people and injured more than 260.  Survivors joined Boston Mayor Martin Walsh and Massachusetts Gov. Charlie Baker to lay wreaths at the site of the bombings on Boylston Street. At 2:49 p.m., the exact moment the first bomb exploded, the city observed a moment of silence and church bells tolled for the victims.

Because of the terror attack, Marathon Monday has become an enormous security operation. It takes six months of planning and involves 8,000 public safety personnel. Bomb sniffing dogs work their way through the crowds and spectators are urged not to bring backpacks. Streets are closed surrounding the finish line and most of the Back Bay is locked down.

But the tragedy of the bombings has inspired celebrations of strength. Building on “Boston Strong” the city has created “Boston One Day,” asking residents to perform random acts of kindness. It reaffirms the message of 8-year old Martin Richard, the youngest victim of the attack, who once held a hand-written sign reading “no more hurting people - Peace.”

Five years ago today Boston was in virtual lockdown, law enforcement still working to determine who carried out the fatal attacks. Authorities would later identify two brothers from nearby Cambridge, Tamerlan and Dzhokhar Tsarnaev, as the suspects.

While attempting to flee the area, they also shot and killed Massachusetts Institute of Technology police officer Sean Collier while trying to steal his gun. After carjacking a Chinese immigrant who escaped and alerted authorities, the Tsarnaevs were tracked down to the suburban Boston city of Watertown where they engaged in a shootout with police. Tamerlan Tsarnaev was killed and his younger brother was apprehended the next day.

Dzhokhar Tsarnaev was convicted in federal court and sentenced to death. His case remains under appeal and his execution has not yet been scheduled.