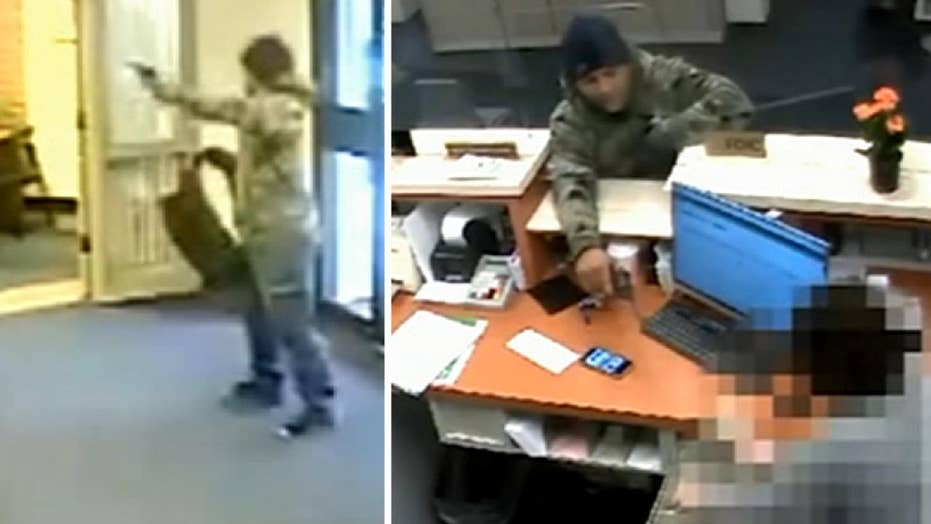 Raw video: FBI doubles the reward to $20,000 for information leading to the identification and arrest of bank robbery suspect, believed to be armed and dangerous, at the Middlesex Federal Savings Bank in Somerville, Massachusetts.

A brazen bank robber terrorized a teller in Massachusetts when he fired a shot into the ceiling before pointing his loaded gun at her while ordering the money to be stuffed into his backpack, surveillance video shows.

A two-week manhunt for the suspect has been ramped up into high gear as authorities are now offering a $20,000 reward for any information leading to the man’s arrest.

Massachusetts police are searching for a suspect in a brazen May 1 bank robbery. (FBI)

Officials said the unknown man walked into the Middlesex Federal Savings Bank just before 10 a.m. on May 1 and fired a single shot into the ceiling.

In the video, the suspect is then seen approaching the teller’s window and gesturing with the loaded handgun, ordering the teller to put money in his backpack.

The FBI said a uniformed Somerville police officer nearby was alerted of a possible bank robbery in progress. When he entered the bank, the suspect allegedly fired a shot at the officer before fleeing the bank on foot.

A video from outside the bank showed a passerby trying to stop the suspect.

“He is dangerous. And he is desperate, absolutely. The video shows that clearly,” former Boston Police Chief Dan Linskey told Boston 25. “That is somebody we need to get off the street very quickly.”

The FBI said the suspect, who was wearing a Nike camouflage hoodie, blue pants and carrying a black and red Under Armor backpack, is considered “armed and dangerous.”