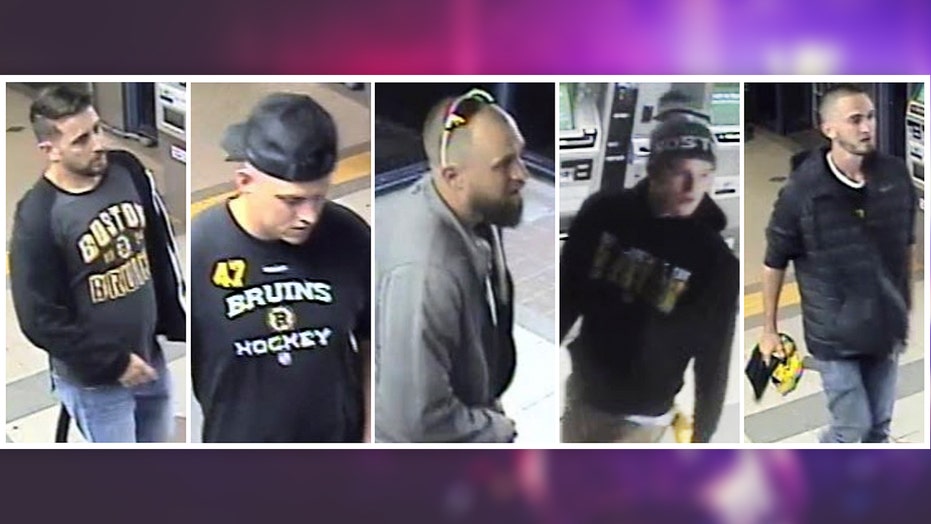 Several Boston Bruins fans were arrested on Wednesday after police say they were allegedly involved in an assault of an individual following a playoff hockey game.

Stiles Bezema, 21, Antonio Green, 31, John Pritoni, 29, and Thomas Pritoni, 23, were all charged with aggravated assault and battery resulting in serious injuries after they turned themselves into police in connection to an assault last week.

On May 10, at around 12:00 a.m., an unidentified person was attacked by five men at North Quincy Station. The victim sustained facial fractures according to the Massachusetts Bay Transportation Authority (MBTA) police.

On May 10, at around 12:00 a.m., an unidentified person was attacked at North Quincy Station. The victim sustained facial fractures after the Massachusetts Bay Transportation Authority (MBTA) police say they were “viciously beat” by five men.<br> (MBTA)

Police posted surveillance images of the five suspects, many in Bruins apparel, on Monday asking if anyone recognized the “alleged Boston Bruins fans.”

Bezema, Green and the Pritonis were arrested Wednesday after turning themselves in. It was not immediately clear who the fifth suspect was.

Prosecutors say the Pritonis and Green were held on $5,000 bail each and Bezema was held on $2,500 after pleading not guilty.

The Bruins defeated the Carolina Hurricanes on May 10 in Game 1 of the Eastern Conference finals. They currently lead the series 3-0.