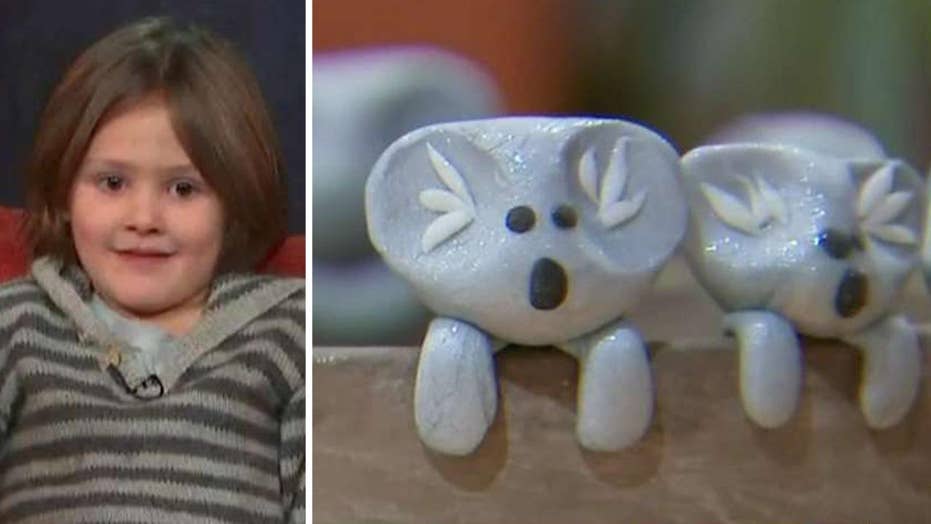 A Massachusetts boy has raised over $100,000 to help the animals affected by the devastating wildfires torching Australia -- by making and selling little clay koalas.

Owen Colley, the 6-year-old founder of Owen’s Australian Creature Rescue, told “America’s News HQ” on Sunday that he started the fundraiser for one simple reason: “Because I like animals.”

Owen said he especially liked koalas “because they climb in trees.”

The 6-year-old’s parents, Caitlin and Simon Colley, said Owen wanted to find a way to help the animals he loved so much.

“When Owen first found out about the fires, like all of us, he was very upset,” his mother said. “We wanted to give him an outlet to do something to be able to help.”

The idea for the little clay koalas came as a way to thank their friends and family members who donated to the cause, she said.

The fires, fueled by drought and the country’s hottest and driest year on record, have been raging since September, months earlier than was typical for Australia’s annual wildfire season.

So far, the fires have killed over a billion animals, with thousands of koalas feared among them, according to estimates. The fires also have killed 28 people, including four firefighters, destroyed 2,600 homes and torched an area over 40,000 square miles – about the size of Ohio.

Simon, who said he’s originally from Australia, told Fox News the fundraiser has left him incredibly proud of his son.

“We have friends and family in Australia who have had to evacuate,” he said. “This was not my idea; this was all Owen’s idea, with Caitlin’s help, and I’m just so proud of him.”

While contributions of any amount were encouraged, people who donate $50 or more will receive one of Owen’s handmade koalas as a thank you gift, according to the fundraiser’s GoFundMe page.

Since Owen has exceeded his initial goal of $1,000, he’s now aiming to raise $3 million to help the animals left suffering from the wildfires. As of Sunday afternoon, the 6-year-old has raised nearly $230,000.