Two people were killed and at least 30 more were wounded in separate weekend mass shootings reported in three states, stirring already brewing fears that a spike in gun violence could continue into summer.

The cities of Savannah, Georgia, Chicago and Austin, Texas are the latest to fall victim to mass shootings late Friday and early Saturday, police have said.

The attacks come amid an easing of COVID-19 pandemic restrictions in much of the country, including Chicago, which lifted many of its remaining safeguards on Friday. Many hoped that a spike in U.S. shootings and homicides last year was an aberration perhaps caused by pandemic-related stress amid a rise in gun ownership and debate over policing. But those rates are still higher than they were in pre-pandemic times, including in cities that refused to slash police spending following the death of George Floyd and those that made cuts.

"There was a hope this might simply be a statistical blip that would start to come down," Chuck Wexler, executive director of the Police Executive Research Forum, told The Associated Press. "That hasn’t happened. And that’s what really makes chiefs worry that we may be entering a new period where we will see a reversal of 20 years of declines in these crimes."

The Gun Violence Archive, which monitors media and police reports to track gun violence, defines mass shootings as those involving four or more people who were shot, regardless of whether they died. Overall, according to its database, more than 8,700 people have died of gun violence in the U.S. this year.

The GVA also found that mass shootings spiked in 2020 to about 600, which was higher than in any of the previous six years it tracked the statistic. According to this year’s count, there have been at least 267 mass shootings in the U.S. so far, including the latest three overnight Friday into Saturday.

In Savannah, police officials said one man was killed and seven others – including two children – were wounded during a shooting on Friday evening. The wounded children were 18 months old and 13 years old, officials said.

Speaking at a press conference after the shooting, Savannah’s police chief, Roy Minter Jr., said the shooting may be linked to an ongoing dispute between two groups, citing reports of gunshots being fired at the same apartment complex earlier in the week. 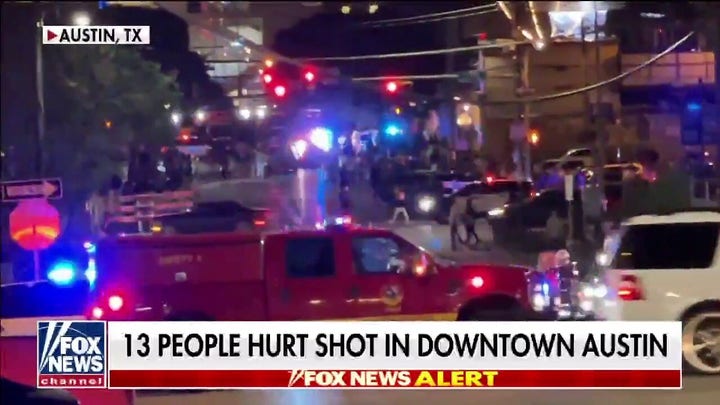 Austin Police arrested one of the suspects shortly thereafter with the help of the U.S. Marshals Lone Star Fugitive Task Force, and were looking for a second.

Interim Police Chief Joseph Chacon said the shooting happened on a street packed with bars and barricaded off from vehicle traffic. He said investigators believe it began as a dispute between two parties. Chacon said both suspects are male, but declined to disclose details such as whether both fired shots, saying the investigation was ongoing.

AUSTIN MASS SHOOTING: 1 SUSPECT IN CUSTODY, ANOTHER AT LARGE AFTER 14 INJURED IN ENTERTAINMENT DISTRICT

"Most of the victims were innocent bystanders, but we’re still sorting out all of the victims to see what their involvement is in this case," Chacon said.

Because of the chaos on the barricaded street, police drove six of the wounded to hospitals in their squad cars. Ambulances transported four people and the other four made their own way to hospitals, he said.

One witness, Matt Perlstein, told KXAN-TV that he was waiting with a friend to enter a bar when gunfire erupted.

"Everything was totally fine," Perlstein said, then gunfire erupted. "We just heard like ... a bunch of gunshots going off. Everyone got on the ground. We couldn’t even comprehend what was going on at the time."

Less than an hour later in Chicago, two men opened fire on a group of people on the city’s South Side around 2 a.m., killing one woman and injuring nine others, police have said.

In a brief statement, Chicago Police said around 2 a.m. two men approached a group of people who were on a sidewalk in the Chatham neighborhood on the city’s South Side.

"Let me be clear, these attacks on 75th Street or, anywhere in our communities, are unacceptable," said Roderick Sawyer, the area’s alderman. "We have been working hard to rebuild 75th Street as a thriving business corridor, and the community is committed to this vision."