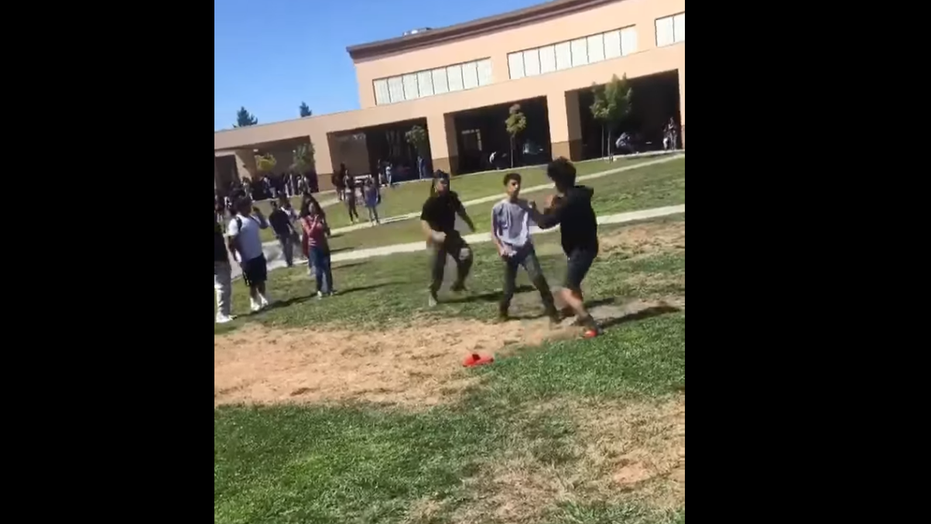 A Marine was caught on camera this week blindside tackling two California high school students who were fighting.

A U.S. Marine sprints to tackle two high school students in Stockton, Calif., to break up their fight. (Courtesy of 209 Times)

The video shows two students at Edison High School in Stockton throwing punches on Wednesday before the Marine, identified as 18-year-old Pfc. Josue Valdez Sarmiento, sprints in and abruptly knocks the grappling duo to the ground.

The video was first posted by 209 Times and has more than 1.2 million views on Facebook.

In a statement to KCRA-TV, the school district said it was aware of the incident and is investigating the situation.

“Stockton Unified is aware of the student matter that took place on 9/11/19 [Wednesday] at Edison High School and the recording circulating on social media. We are actively investigating the situation,” the district said.

Valdez Sarmiento is a recent graduate of the school and was there to help with recruiting but is not a recruiter, the U.S. Marine Corps said.

“He saw a dangerous fight break out. Upon observing that situation, he moved over and broke up the fight," Maj. Thomas Driscoll told KCRA. "Although, the manner in which he did [could] have been improved, we are proud of Pfc. Valdez Sarmiento for his decision to intervene."

A U.S. Marine held down two high school students in Stockton, Calif., after tackling them to break up their fight. (Courtesy of 209 Times)

Valdez Sarmiento has received counseling and been reassigned to office duties, according to the Corps.

The 209 Times said the students had been fighting for “over a minute uninterrupted in the open.”

“[… What] we are posting that parents may find concerning is a Marine recruiter blindside tackling a student so hard to break up the fight that if appears he hurts the student and does more damage than the actual fight itself. He ran full-speed from over 30 yards out,” they said. “Also of concern is the lack of response from actual school staff, as the fight lasted for over a minute uninterrupted in the open.”

People had mixed reactions to how Valdez Sarmiento broke up the fight.

“It was just too excessive ... how he came toward the kids,” student Johnny Hempill told KCRA. “I feel like going at a kid, especially when he’s not looking, makes more of an impact.”

But a parent told Fox40 Sacramento the action was justified.

“It could have been a little less of a tackle, but I believe in discipline. These kids were not behaving. Someone's got to stop it,” the parent said.

Many social media users backed up the Marine's actions.

"That was a soft tackle to stop a fight using non-lethal force. Crybaby parents need to learn to teach his or her child better," Twitter user Rudolph Hernandez wrote, while another user said the tackle "looked pretty effective."

However, user Scott Baerst said, "That was dumb and dangerous. Hope that kid's back/neck is OK."

The condition of the students has not been released, according to reports.

The school and Stockton Police Department are investigating the incident.