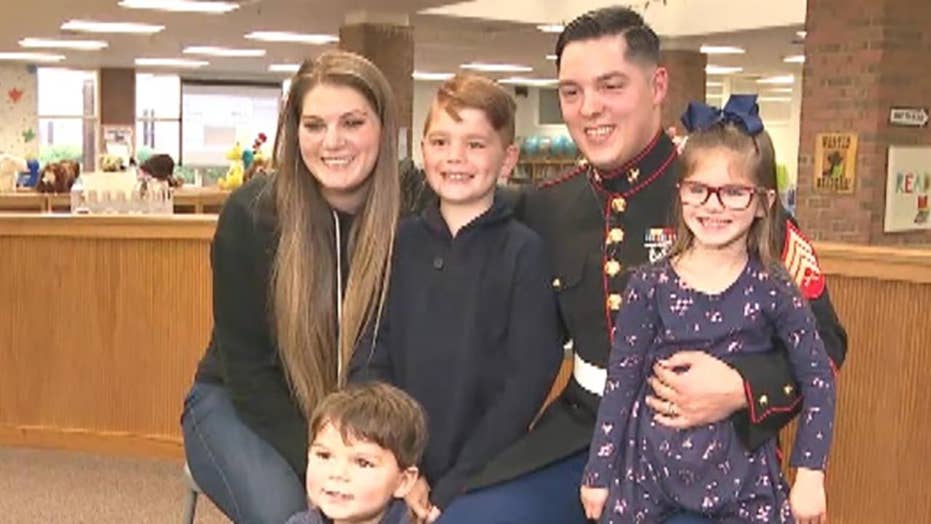 Marine sergeant surprises his kids at their school

A Marine dad returned from overseas after a months-long deployment to surprise his children at their Georgia school Friday.

Marine Sgt. Garen Evans’s kids weren’t expecting their father to be back in the U.S. until next month after a seven-month deployment in Japan, according to Fox 5 Atlanta.

WORLD WAR I CENTENNIAL: US AUTHOR HONORS GRANDFATHER BY RETURNING KEY TAKEN FROM FRANCE 100 YEARS AGO

But unbeknownst to them, their dad came home sooner than anticipated and their parents had arranged for him to pay them a visit at school as a surprise, the outlet reported.

The tender moment when Evans walked into his son’s classroom was captured on video. The boy appeared shocked when he realized what was going on, and soon launched into his father’s arms for a hug with a smile on his face.

The clip also showed Evans in a sweet embrace with his little girl.

The couple was able to plan the visit with the help of Ola Elementary School officials, Fox 5 Atlanta reported. But not spilling the beans on the details beforehand was no easy feat, Evans’ wife told the outlet.

“It was hard! Every time we would talk to him, I just wanted to like 'Oh, and you'll see dad in like five days!” she recalled. “I just wanted it to be a special surprise for them.”