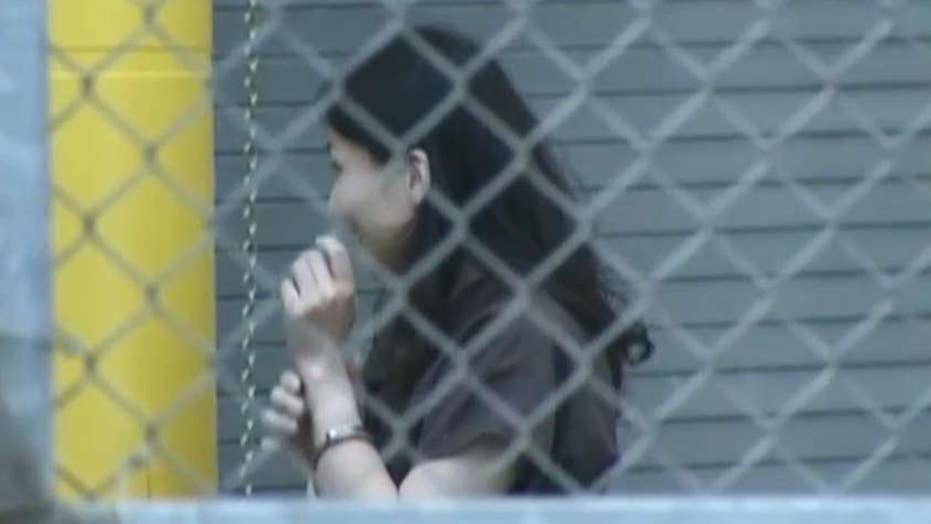 The feds say Yujing Zhang talked her way into President Trump's resort claiming she was there to use the pool, but when Secret Service agents stopped her inside they discovered she had four cell phones, a laptop and an external hard drive; Phil Keating reports.

A Chinese businesswoman was sentenced Monday to eight months in prison for trespassing at President Trump’s Mar-a-Lago resort in Florida and lying to Secret Service agents.

Judge Roy Altman also ordered that Yujing Zhang, 33, be turned over to immigration officials for deportation upon her release. Because Zhang received nearly eight months' credit for jail time since her arrest on March 30, she has about a week more to serve.

Altman said trespassing on government property, particularly one where the president is staying, is a "serious offense."

Zhang, a 33-year-old Shanghai consultant, was convicted in September of trespassing at the Florida resort in March and lying to agents who confronted her.

FILE: Yujing Zhang, left, listens to a hearing in West Palm Beach, Fla. this past April. (Daniel Pontet via AP)

Prosecutor Rolando Garcia argued for Zhang to receive an 18-month sentence, saying she "lied to everybody" to get into Mar-a-Lago. He did not specify what he believed Zhang's agenda was, but said her actions "suggest it was not just to take a photo with a famous person."

Federal sentencing guidelines called for a penalty of up to six months in prison.

Zhang fraudulently gained entry onto the restricted Florida resort by telling a receptionist and Secret Service agents that she was a member and was there for a United Nations Chinese Friendship Association event – despite being repeatedly told that no such event was scheduled.

When Zhang was arrested, she was carrying four cellphones, a computer and an external hard drive. Authorities later found nine flash drives, five cellphone SIM cards, a signal detector that could spot hidden cameras, and around $8,000 in cash in her Palm Beach hotel room.

Garcia said the cash and electronics "certainly does not suggest she is some misguided tourist. She had an agenda."

TRUMP MAKES FLORIDA HIS PRIMARY RESIDENCE, BUT SAYS NEW YORK WILL ‘HAVE A SPECIAL PLACE IN MY HEART’

After acting as her own attorney at trial, Zhang allowed federal public defender Kristy Militello to help her at the hearing. Militello told Altman that Zhang had a "fantastical idea" that she could form a business partnership with the president, whom "she deeply admired," or his family. Militello also noted that Mar-a-Lago has no rule against carrying any number of electronics and said Zhang should be sentenced to time served.

Zhang paid $20,000 in February to a man she met online in order to attend a Chinese-American friendship event at Mar-a-Lago on March 30. The event promised a photo with the president or a member of his family. Zhang's former public defenders believed the man was "Charles Lee," a Chinese national who ran the United Nations Chinese Friendship Association, which is not affiliated with the U.N.

Charles texted Zhang in mid-March that the Mar-a-Lago event had been canceled but he could get her into other events featuring Bill and Hillary Clinton or billionaire Warren Buffett. Instead, Zhang demanded a refund. Prosecutors said this proved she knew the Trump meet-and-greet was off and her arrival at Mar-a-Lago wasn't a misunderstanding.

Zhang flew to the United States on March 28. Two days later, a taxi dropped her off at the Secret Service screening area across from Mar-a-Lago. The president and his family were visiting the club, although he was playing golf at his nearby course and Zhang was never near him.