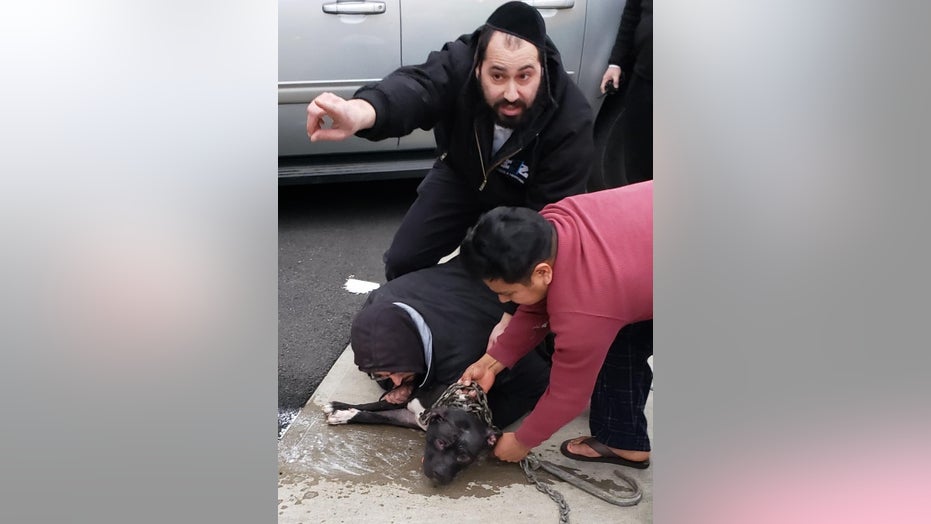 A Spring Valley, N.Y., man is being hailed a hero after stopping a pit bull from tearing apart a baby boy and his sister Tuesday afternoon.

Moshe Lefkovits, a volunteer with the emergency services organization Chaverim of Rockland, immediately rushed over to a 1-year-old boy in the arms of his sister who was being attacked.

The sister panicked and tried to free him, but the dog had locked its jaw on the child's clothing. Lefkovits was able to take a knife, cutting the baby's clothing to save the children from the pit bull.

More than 20 other volunteers responded, a Chaverim spokesman told Fox News, after Lefkovits put out a call for help.

The baby had a couple of bruises from being thrown back and forth, but he and his sister escaped with no bites thanks to Lefkovits' actions.

A bystander, Aharon ben Toiba, was attacked and bitten in the hand and arm before Chaverim workers could pin down the dog. The Spring Valley Police Department also responded and Toiba was transported to the hospital for surgery.

Neighbors had complained for months to police about the dog, Hamodia reports. Police are currently searching for information on the owner of the pit bull.

The attack comes days after a neighboring community, Monsey, witnessed a horrific act of "domestic terrorism" when a man entered the home of a rabbi during a Hannukah celebration and stabbed five people with a machete. The incident was part of a disturbing rise of anti-Semitic attacks surrounding New York City.