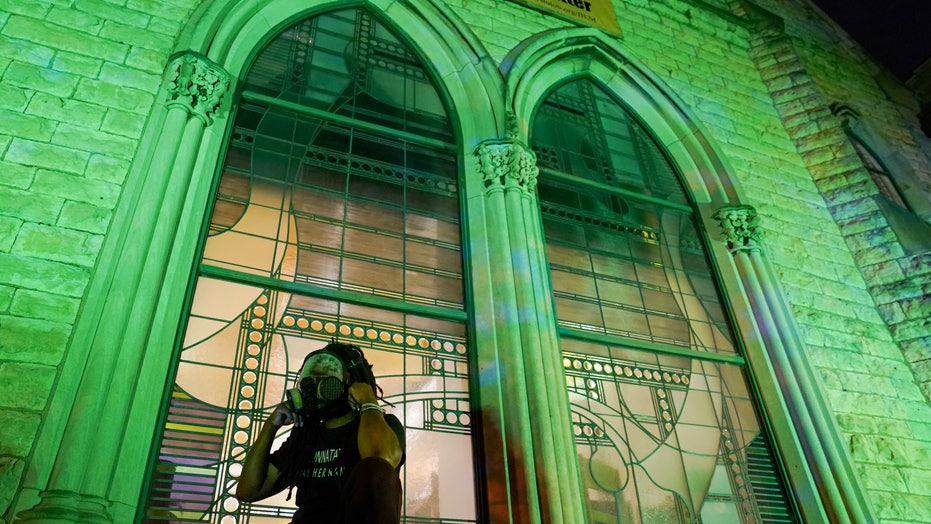 At least 24 protesters were arrested Thursday night in Louisville during a second consecutive night of Breonna Taylor protests.

They were arrested before 1 a.m. on charges including unlawful assembly, failure to disperse, and riot in the first degree. The demonstrators allegedly broke windows, damaged city buses, and tried to set fires.

The First Unitarian Church of Louisville had opened its doors and offered its property as a safe haven to protesters who would otherwise be arrested after a police curfew began at 9 p.m. Officers blocked the exits of a church and several people were detained, including state Rep. Attica Scott, D-Louisville.

At least 50 protesters remained outside in the church's courtyard, with about 20 more inside the sanctuary. Some taunted officers in riot gear who stood nearby. According to one video posted on Twitter that was purportedly recorded on church grounds, one person yelled and threatened White people in the area to leave.

"White people have just been threatened with assault and kicked out of the church sanctuary grounds," one user wrote on the social media platform Thursday night. "Almost all press were demanded to leave as well."

A member of First Unitarian Church on Thursday night said its purpose for offering sanctuary to protesters was to provide "a safe space of love and compassion in the service of justice," according to a video posted on Twitter by WFPL-TV reporter Ryan Van Velzer. A separate photo showed a snack table with refreshments and apples.

The Rev. Lori Kyle told The Courier-Journal that police had no intention of entering the church. She added that the Louisville Metro Police Department would leave after they finished an arson investigation at a library and made some arrests.

Nearby, a livestream on the police department's Facebook page showed at least a dozen people handcuffed and sitting on a curb before they were moved into transport vans, according to the paper. At least one protester was pinned down by officers before spitting at them.

Another video posted on Twitter would later show the protesters leaving the church after they allegedly received word they could disperse without being arrested.

The stone Gothic-style church was built in the late 19th century and is known for its progressive ideology. A large Black Lives Matter banner hangs outside it.

It also welcomed protesters during the first night of unrest in the city.

"After the county-wide curfew tonight, Injustice Park protesters were welcomed to the First U courtyard and given sanctuary to continue their rally until they were ready to leave," the church wrote on Facebook on Wednesday.

Thursday's second night of unrest in the city followed a grand jury's decision not to indict Kentucky police officers for killing Taylor. One officer was indicted for wanton endangerment, a charge not directly linked to Taylor's death.