FOX NEWS EXCLUSIVE: Dozens of U.S. Navy pilots have written a letter demanding Capitol Hill lawmakers and top military brass allow more pilots to carry arms on bases, and allow those standing watch at flight schools across the country to be armed in the wake of the deadly shooting at Naval Air Station Pensacola by a Saudi officer training there.

The letter, obtained exclusively by Fox News, is a form letter the pilots hope their colleagues will use to write lawmakers to get what they say is much-needed attention — preventing further shootings on U.S. military bases, in part by increasing deterrence.

“It is reprehensible that a military installation, much less its warfighters based there, be at the mercy of off-base, civilian law enforcement when faced with an immediate threat to their lives,” the letter says. The letter was sent to Fox News by two U.S. Navy instructor pilots from NAS Pensacola, in Florida, who requested anonymity because they were not authorized to speak with the press.

The letter comes after Saudi national Mohammed Saeed Alshamrani, a second lieutenant at Naval Air Station (NAS) Pensacola, opened fire in a classroom on December 6, killing three and injuring several others before being shot dead by officers. In a short manifesto on Twitter, the gunman condemned the United States as a "nation of evil" and said he hated Americans for their supposed crimes against Muslims and “humanity.”

The author of the pilots' letter blames a 1992 law, which “caused military bases across the United States to become ‘soft targets.’ On-base security is often provided by contracted civilians whose physical fitness requirements and specialized training fall far short of the standard servicemember’s,” according to the letter.

Some pilots say it is inexcusable that a weapons expert like one of the three shooting victims was killed while standing duty unarmed.

“ENS Joshua Kaleb Watson was a small-arms instructor and captain of the rifle team at the United States Naval Academy.  Yet when charged with standing the watch, he was equipped with nothing more than a logbook and a pen,” the letter says.

The pilots hope their effort “will discontinue what has become a severe irony burdening our servicemembers: that they can be entrusted to fly multimillion-dollar aircraft over hostile territory, command companies of infantrymen into battle, or captain ships around the world, all while holding the nation’s top security clearances, but when back home are not trusted to carry a simple pistol in order to protect themselves, their families and their fellow servicemembers.”

"Fox & Friends" asked Defense Secretary Mark Esper about base security on the sidelines of the 120th Army-Navy game in Philadelphia Saturday.

At a Pentagon press briefing Thursday, a reporter asked if the Pentagon was considering the Navy pilots' request to be armed.

Fox News has previously reported Navy pilots have demanded to be armed, embarrassed that the officer standing watch, Ens. Joshua Watson, former captain of the Naval Academy rifle team, was forced to stand watch unarmed when the shooter arrived at the building he was guarding. Airman Mohammed Sameh Haitham, 19, of St. Petersburg, Fla.; and Airman Apprentice Cameron Scott Walters, 21, of Richmond Hill, Ga., were also killed.

The family of Watson, 23, who had graduated from the U.S. Naval Academy this past May, urged lawmakers and military officers to allow service members to protect themselves on base during an appearance Tuesday morning on “Fox and Friends.”

A vehicle drives by a tribute to victims of the Naval Air Station Pensacola that was freshly painted on what’s known as Graffiti Bridge in downtown Pensacola, Fla., on Saturday, Dec. 7, 2019. (AP Photo/Brendan Farrington)

“He was well qualified to have a firearm and defend himself. If we are going to ask these young men and women to stand watch for our country, they need the opportunity to defend themselves. This isn’t the first time this happened and if we don’t change something, then it won’t be the last,” said Adam Watson, Joshua’s brother. “My brother was an excellent marksman. If my brother had not had that right stripped from him, this would be a different conversation.”

“He was my baby. It hurts me. It doesn’t really anger me as much as it hurts me. My baby was standing watch and he lost his life because he wasn’t armed,” she said.

“We trust 18-year-old privates in combat with grenades, anti-tank missiles, rifles and machine guns, but we let service members get slaughtered because we don’t trust anyone to be armed back here in the United States,” a senior U.S. Army officer told Fox News.

“Why are we cowering in our offices? It’s insane,” the officer added. 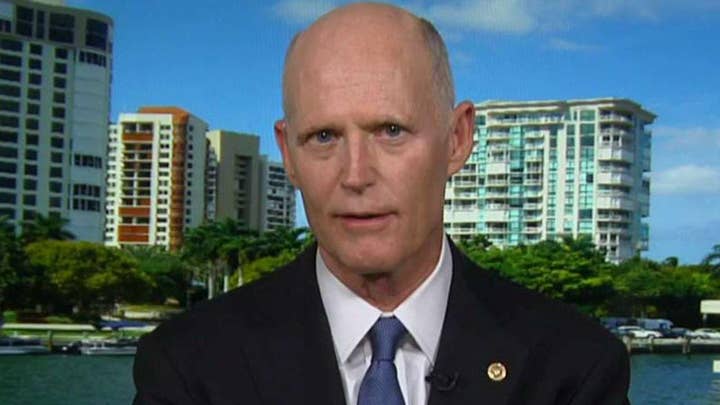 One pilot called base security at NAS Pensacola and other Navy bases “mall cops,” because protection on the base has been outsourced to private security and many were “fat and out of shape.”

Charles Hogue, a police officer at NAS Pensacola and his partner were the first two law enforcement officers on scene Friday morning when the Saudi gunman opened fire inside the API classroom building.

He was shot in the thigh, his son said, according to the Pensacola News Journal.

The paper said Hogue was able to assist other people in the building before escaping and was one of three law enforcement officers wounded in the shooting.

The U.S. Marine Corps for years has provided armed Marines known as “Guardian Angels” to watch over training at The Basic School for newly minted Marine officers in Quantico, Va., outside the nation’s capital. The Guardian Angels have watched over the young officers during live-fire training and were ready to respond. Some service members asked for a similar program for the Navy, even for flight school.