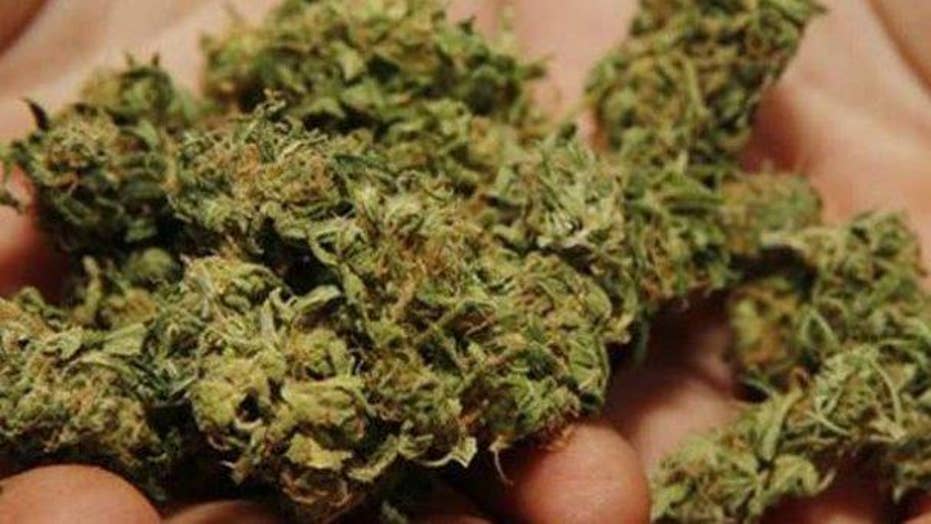 From his sidewalk vantage point in front of an outdoor equipment store in downtown Durango, Colo., Matthew Marinseck has seen a transformation in this mountain resort town.

The picturesque town near the New Mexico border, once a vibrant, upscale community dotted with luxury hotels, is being overrun by panhandlers – thanks, in part, to the legalization of marijuana.

The town suddenly became a haven for recreational pot users, drawing in transients, panhandlers and a large number of homeless drug addicts, according to officials and business owners. Many are coming from New Mexico, Arizona and even New York.

“Legalized marijuana has drawn a lot of kids here from other states and the impact has not all been good,” said Marinseck, 58, while holding a cardboard sign asking for “help.”

Several people holding cardboard signs could be seen along the streets of Durango now. Some just ask for marijuana, or imply that’s what they want with a photo of a green pot leaf. But it’s not just pot users being drawn to Durango.

“[The] city really started freaking out when they started seeing needles in the streets” said Marinseck, a self-avowed former hippie.

Caleb Preston, a store manager in a gift shop and a former “street entertainer,” said the homeless and panhandling issue in Durango has gotten out of hand since the state legalized marijuana.

“Just this year there has been a major influx of people between 20 to 30 who are just hanging out on the streets,” Preston said. “The problem is while many are pretty mellow, there are many more who are violent.”

Preston said he’s become accustomed to kicking out vagrants who perch themselves in front of his store.

“Most of the kids here are from out of state, and I would say it has a lot to do with the legalized pot,” said Preston.

He said he’s also noticed an uptick in crime in the area. Shoplifting, he said, has become a major problem in Durango and business owners are becoming fed up.

The city’s Business Improvement District held a meeting May 12 to review the results of a survey completed by local businesses on how to address the panhandling issue, which has become an urgent matter as the city enters its busy summer tourist season.

Among the suggestions were stricter laws for panhandling and loitering, strategic placement of obstacles such as bistro tables and flower boxes to discourage sitting and lying on sidewalks. They also proposed launching a campaign discouraging tourists to give money to the pan handlers. A rudimentary effort is already in place with handwritten signs encouraging donations be made to charities that help the homeless rather than handing panhandlers’ money directly.

A hand-scrawled sign asking people to donate to homeless groups rather than to panhandlers directly. (Joe Kolb/Fox News)

Tim Walsworth, executive director of Durango Business Improvement District, said he is frustrated. He said he has to walk a tightrope between the civil liberties of the homeless population and the reputation and attractiveness of the downtown area, which for years has been a hot tourist destination.

“We’re hoping to discourage the transient and professional panhandlers that are impacting the perceived safety and cleanliness of our downtown, as well as help those who are truly in need,” Walsworth said in a statement.

Conspicuously absent from the busy downtown: The presence of police patrols.

Durango Police Chief Kamran Afzal said he has only been on the job for a month and is still assessing where the needs are in the town. With a department of 50 officers and only five per shift who cover 20 square miles, the challenge is daunting, he said. He said the property crime rate is 12 percent higher than the national average.

“At this point, since I’m new here, I can’t definitively say this number is related to our homeless population,” Afzal said.

But he would not go so far as to say that the rise in panhandlers is directly attributed to the legalization of marijuana.

“We are going to look at the behavior of individuals who cause discomfort for residents and visitors,” he said, through a Community Engagement Team. But, he said, the tricky part is figuring out when panhandlers cross the line to criminals.

Panhandlers like Marinseck may not exactly pose a threat to pedestrians shopping at the boutiques, souvenir stores or microbreweries in downtown Durango. But they don’t exactly evoke the wholesome image the business district wants to project.

Still, the city recently settled a lawsuit with the American Civil Liberties Union allowing the homeless population to panhandle.

A clerk at a local hotel who declined to give her name told Fox News that since marijuana has become legal in Colorado, the quality of life in Durango has worsened.

She said she’s frequently harassed when she goes to the supermarket or local WalMart. Some of the local parks, she said, have been taken over by the homeless.

“I’ve lived here my entire life and don’t feel safe here anymore,” the clerk said. “If it wasn’t so beautiful here, I would probably move.”