Las Vegas flooding at the LINQ

The parking lot of the LINQ hotel in Las Vegas flooded during severe storms that brought heavy rain. (Courtesy: @CoachKenCamp/Twitter)

Flash flooding has impacted the iconic Las Vegas Strip as well as several of its casinos.

Videos posted to social media show standing water along Las Vegas Boulevard. People walking along the famous street can be seen getting soaked by heavy rain.

One social media video shows water gushing through a screen at Circa Resort & Casino. Standing water can be seen collecting on the carpet below.

One social media user shared a photo of what appears to be water coming through the ceiling at Caesars Palace.

Water can be seen pouring through a major hole in the ceiling of Planet Hollywood Casino along the Strip. Shocked patrons are seen recording the ordeal on their phones. 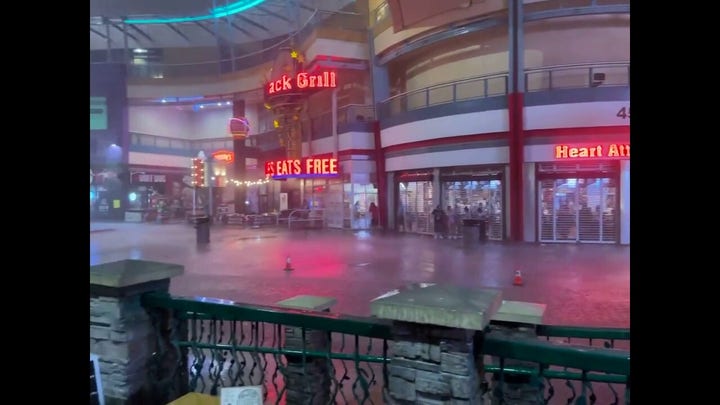 Strong storms have been moving through the Las Vegas area. A flash flood warning and severe thunderstorm warning were issued for the Las Vegas Valley early Friday morning, according to the City of Las Vegas.

The National Weather Service office in the city warned of scattered thunderstorms again on Friday afternoon and evening.

"Stay alert to changing weather conditions, especially if you have outdoor plans," it tweeted. "Boaters should use extra caution and be prepared to quickly head to shore if hazardous weather approaches!"