As Los Angeles County residents endure rising crime and increasing homelessness, Sheriff Alex Villanueva is slamming what he describes as a political push fueled by defund police activists to fire 4,000 sheriff department employees who have not been vaccinated against the coronavirus.

Villanueva, who oversees the largest sheriff's department in the nation, said he’s the "only one left standing" when providing counterbalance against the Los Angeles County Board of Supervisors, which has progressive Los Angeles County District Attorney George Gascon "in their back pocket."

"This is nothing but a power grab by the board. And it's shameful, and it's going to be harmful to public safety," Villanueva told Fox News Digital. He noted that the board endorsed Gascon, who is now facing a second recall effort backed by wealthy Democratic donors and Hollywood honchos.

One of the women was nearly raped, but no arrest has been made. The assaults happened in the same neighborhood where UCLA graduate student Brianna Kupfer was stabbed to death while working at a luxury furniture store last month. The suspect charged with her murder is a transient man with a lengthy rap sheet.

"The board couldn't care less about the opinion of the residents," Villanueva said, referring to public safety concerns. "They're that power hungry in there, so walled off from normal life. While they were in the comfort and security of their homes during the pandemic, when there was no vaccine, our deputies were on the front lines out there answering calls for service … And now this board of supervisors wants to turn around and fire those very same people who sacrificed everything to keep public safety. It's just, it's really an immoral position these people have adopted, and just shame on every single one of them."

Last week, the Los Angeles County Board of Supervisors voted 4-0 in favor, with one abstention, of a motion pushing to take away the sheriff’s authority to discipline – and terminate – sheriff department employees who don’t comply with county mandates, handing that power over to the county’s personnel director. The proposed change to the county civil service rules will go to a final vote March 15.

"They're the only government entity in the entire nation that has doubled down on defunding law enforcement," Villanueva said. "They have a hiring freeze on my department as I'm facing a huge deficit of personnel.

"Why on earth would we impose a hiring freeze? They're deliberately trying to defund and eliminate the sheriff's department through attrition, and it's just absolutely shameful because our community depends on us, wants us out there, wants to see a lot more of us, and the board is doing the exact opposite of what the voters of L.A. County want, and they need to pay the price." 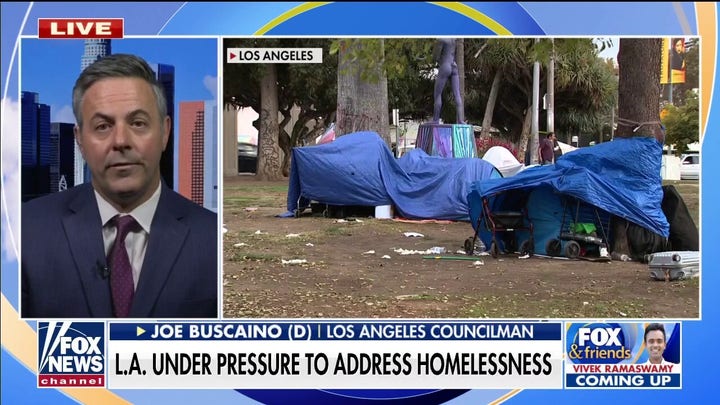 Villanueva, who has for months refused to enforce the COVID-19 vaccine mandate for county employees, immediately criticized the board’s move as a "suicide pact" to start the process of firing about 3,000 sworn deputies — or about 30% of the workforce — and 1,000 other professional staff.

"This is strictly a political ideology," Villanueva told Fox News Digital of the push to fire thousands of deputies. "There is nothing that is driving them that's based on science or combating the coronavirus because we're surrounded by five counties who don't have vaccine mandates, and now they're actively recruiting members of my department and with even sign-up bonuses."

The decision comes as Los Angeles County has seen a 94% increase in homicides and a 64% increase in grand theft over the last two years, and there’s a hiring freeze at the department, Villanueva said.

"We're the most understaffed law enforcement agency in the entire nation, and on top of that, they want to erode our presence even further. And that is just shocking. And we're in the middle of a crime wave," Villanueva said. "And our patrol seasons are down to 72% of staffing levels, and they want to go below that. That is insane. There's no other way to describe it, but reprehensible. And these supervisors, they need to just quit right now."

Reached by Fox News Digital, a spokeswoman for the Los Angeles Board of Supervisors said the motion "did not single out LASD, it applies to all county departments."

"Despite the sheriff’s assertions to the contrary, the board did not vote to terminate a single employee. The county’s vaccination policy is intended to protect the health of employees and the public they serve," the spokeswoman said.

"The Board voted 4-0-1, with Supervisor Barger abstaining, to direct a series of actions that would authorize the director of personnel, rather than any individual department head, to take action to terminate employees who are not vaccinated and not granted a religious or medical exemption."

She added that the motion "provides a generous timeline for progressive discipline for employees who chose not to comply, starting with a notice of non-compliance and moving to a 5-day suspension followed by termination only as a last resort after that" and that "employees have ample time to request an accommodation on medical grounds or because they have a sincerely held religious belief."

More than 2,000 accommodation requests have been granted to date, the spokeswoman said.

A recent poll conducted by the University of California at Berkeley and published this week indicated that crime and homelessness are top issues for registered voters across California.

Villanueva spearheaded efforts to clear hundreds of homeless camping in Venice Beach over the summer, but residents who recently spoke to Fox News Digital said law enforcement agencies aren't getting support from local government to finish the job. The statewide primary election is in June, and in Los Angeles County, there are elections for the offices of sheriff, county assessor, supervisor and superior court judge.

"I think the community is fed up with their ideology, and they're going to pay a price at the polls come June," Villanueva said. "This will be a referendum on that woke-ism."

Gascon, who ran on a platform of radical criminal justice reform and took office in December 2020, is facing a second recall effort after the first backed by Republicans failed last year.

His prosecutorial policies, which have included a controversial juvenile "diversion" program and directives preventing assistant district attorneys from pursuing the death penalty and cash bail for certain offenses, have been widely criticized.

Gascon defended his directives Wednesday, arguing they were based on science and research as across the country "jurisdictions are moving away from a tough-on-crime approach because it destroys budgets, is plagued with inequities and has not made us safe."

"Everything they're doing emboldens the criminal community. Everything they're doing is to support them," Villanueva said. "They talk about harm reduction, not harm that, you know, that befalls on victims of crime. It's a harm that befalls on criminals who get arrested for committing a crime. That is the harm they’re trying to reduce – it’s a de-carceration movement."

In addition to its support for Gascon, Villanueva pointed to how the board of supervisors has been using an initiative called Measure J, approved in November 2020, to divert county funds away from law enforcement to "racial justice" groups advocating for youth development, job training, small business development and "alternatives to incarceration" in communities of color.

"They all are waiting with their hands out because they want to get money from the sheriff's department budget," Villanueva said. "As they're reducing the department's budget, they're trying to transfer it to all of these 501c3 nonprofits.

"All these groups lining up trying to impeach me – they’re the very same people pushing Measure J, and they were standing to gain $100 million the first year alone in this reimagining public safety, which means they want the county money."

Los Angeles hosted the Super Bowl this month, and Villanueva said its "hypocritical" for celebrities and Los Angeles Mayor Eric Garcetti to be allowed to crowd together in a stadium without masks when officials in the same region are using the coronavirus pandemic as a reason for moving to fire thousands of deputies and to mandate masks for teachers and schoolchildren.

"It's absolutely hypocritical," Villanueva said. "I'd like to stress that I may be the last man standing in the county, but I'm going to continue serving the community. I'm a Democrat of the JFK and FDR vein. And I know we're rare. It's like fighting a unicorn these days, but we still exist.

"And I want to work and represent everybody, both parties — no party — doesn't matter," he added. "We're here to provide public safety. They're all about playing politics, and I'm just fed up with them."