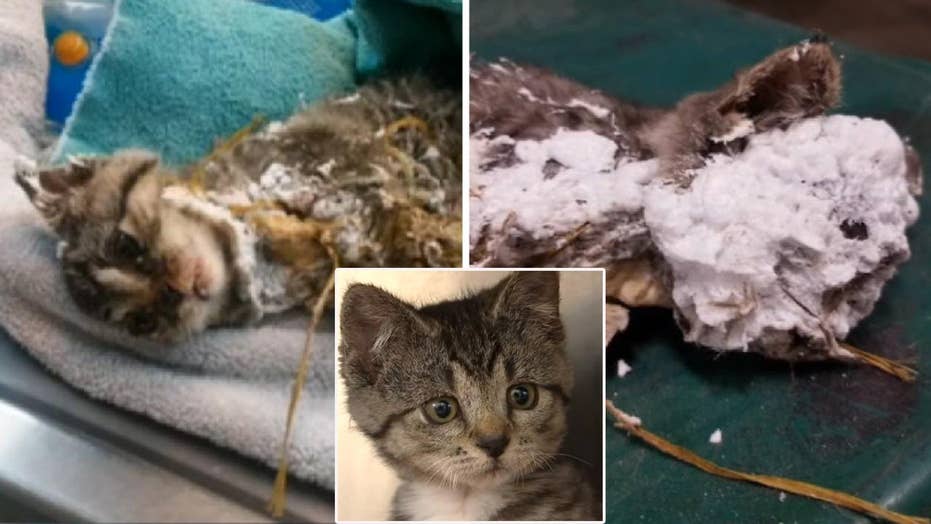 Kitten found encased in spray foam and trapped in garbage can

This kitten may be a few weeks old, but he's already used up one of his lives.

The Washington County Sheriff's Office said Wednesday that deputies rescued a kitten from a garbage can earlier this month that had been encased in spray foam and trapped inside.

A garbage disposal worker was working to empty a trash can near Hillsboro, Ore. on May 3 using a hydraulic arm when he noticed the contents of the container were not coming out.

"Upon further inspection, he noticed a small cat, encased in spray foam, hanging upside down from its back legs," the sheriff's office said in a news release. "The driver knew the cat was still alive because he could hear it whining."

The worker then took the 8-week-old male kitten back to the Hillsboro Garbage Disposal, where crews worked to remove the kitten from the spray foam and take it to an nearby veterinarian for care.

An 8-week old male kitten was discovered encased in spray foam and hanging upside down in a trash can in Oregon earlier this month. (Washington County Sheriff's Office)

"He looked like something out of a Halloween horror show," Dr. Diane Healey with the Hillsboro Veterinary Clinic told FOX12. "It obviously hadn't been there too terribly long, or he would have suffocated, the head was covered, the face was covered, the legs were stiff, he couldn't move them."

The sheriff's office said in a news release that the garbage can came from a property with multiple structures, including two residences and several rented buildings.

"The kitten likely belongs to one of two different feral cats that live on the property, both with litters of kittens," police said. "With all the people coming and going from the property, it’s unclear who may be responsible for this act of animal cruelty."

"He looked like something out of a Halloween horror show"

The kitten is now recovering at an area animal shelter and is expected to make a full recovery. Police said the cat will be returned to its owners once the investigation is complete.

Anyone with any information about the incident is asked to contact the Washington County Sheriff's Office at 503-846-2700.