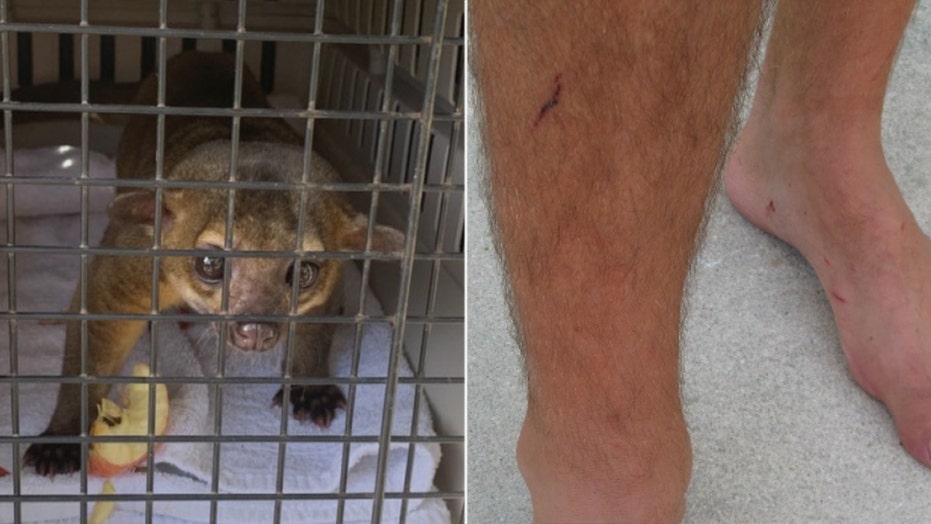 A kinkajou – a tree-dwelling mammal with a prehensile tail – scurried into a Florida apartment and attacked a man who had opened the front door to leave for work, according to officials.

The kinkajou bit the 37-year-old man’s foot and scratched his leg but didn't seriously injure him, according to a Florida Fish and Wildlife Conservation Commission report obtained by Fox News.

The attack unfolded last month in Lake Worth, Fla., which is about 40 minutes from Fort Lauderdale, at the apartment the victim’s girlfriend rented, the report said.

A kinkajou ran into a Florida apartment and attacked a man who had opened the front door to leave to work, according to officials.   (Florida Fish and Wildlife Conservation Commission)

The man told investigators he’d seen the fruit-eating mammal sitting on an outside fence the day before and he’d left some watermelon for it to eat. He added that the next morning, when he was leaving the apartment, the kinkajou was right outside the door.

“The Kinkajou immediately attacked him, biting him on the ankles,” the report said, adding that the man tried to force the animal back outside but couldn’t so he eventually pushed the kinkajou into the bathroom and closed the door.

The man suffered bites to his foot and a scratched leg. (Florida Fish and Wildlife Conservation Commission)

The report said the animal was "trapped" in the bathroom until animal control and sheriff’s deputies arrived and transported it to a “licensed FWC (Fish and Wildlife Conservation) facility.”

"It sounded like a 300-pound man was tackling him in the kitchen,” Natalie Dulach, another woman who shared the apartment with the man's girlfriend, told WPEC-TV.

“When he opened the door, it like charged at him, at his leg and like clung to his leg and then he was trying to get it off of his leg. And it kept coming back in," Dulach added.

Fish and Wildlife Conservation officers told Fox News they were investigating how the animal got to the neighborhood.

“There are a lot of people who like to own certain species of animals but it is a highly regulated activity and we oversee the proper caging and licensing requirements in order for somebody to legally have a permit to own one of those species,” Tyson Matthews, an FWC officer, told Fox News.

“Sometimes people own them without having proper permits and they get loose or they release them on their own, so we are still looking into who may have owned that animal,” he added.

Matthews said, “It’s unlikely that that species would be living in an urban environment,” explaining that kinkajous are typically found in the tropical forests of Central and South America.