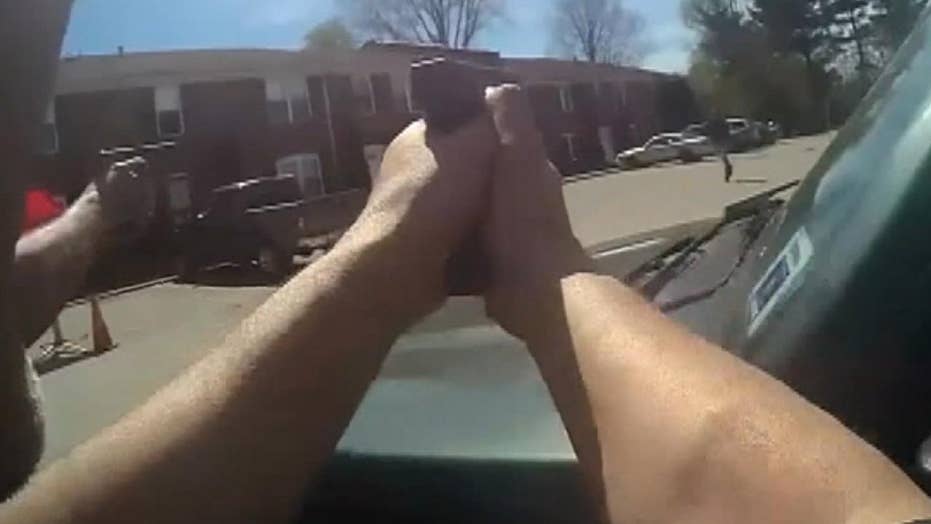 Two police officers in Kentucky are on administrative leave after they fatally shot a shooting suspect in the parking lot of an apartment complex Tuesday who could be seen on a bodycam running at them.

"His behavior was described as erratic by the witnesses prior to our arrival, and I think we continued to see that once the officers were on scene," Lt. Aaron Crowell said at a news conference.

Davis was initially found crouching behind a car near the victim, so close that authorities were not able to deliver aid, according to Crowell.

Video taken by a neighbor obtained by WDRB shows Davis moving around the parking lot, as officers and residents of the complex demand he put the gun down.

Two police officers can be seen moments before opening fire as a suspect in another shooting runs at them with a weapon on Tuesday. (Louisville Metro Police Department)

"He had every opportunity to surrender, to drop the gun," Tim Bonner, who lives in the apartment complex, told WDRB. "They asked him several times. You could hear them yelling out the commands. And when he took off running with the gun forward, there's nothing they could do. Nothing they could do."

James Walker says his reserve officer training kicked in when he helped police arrest an armed man outside a bank in Fort Worth, Texas.

"I think there was a great deal of restraint," he said. "I think they were on scene for about 12 minutes, I believe, while they were trying to de-escalate the individual."

Louisville Metro Police Chief Steve Conrad said the gunman was taken to a hospital and pronounced dead. The Jefferson County coroner's office said that Davis died of multiple gunshot wounds. The original shooting victim was also transported to an area hospital, where he was listed in critical condition.

Both officers are now on administrative leave, pending the investigation by the LMPD Public Integrity Unit. This was the second time that Mattingly shot a suspect in the last 5 months, according to WDRB.