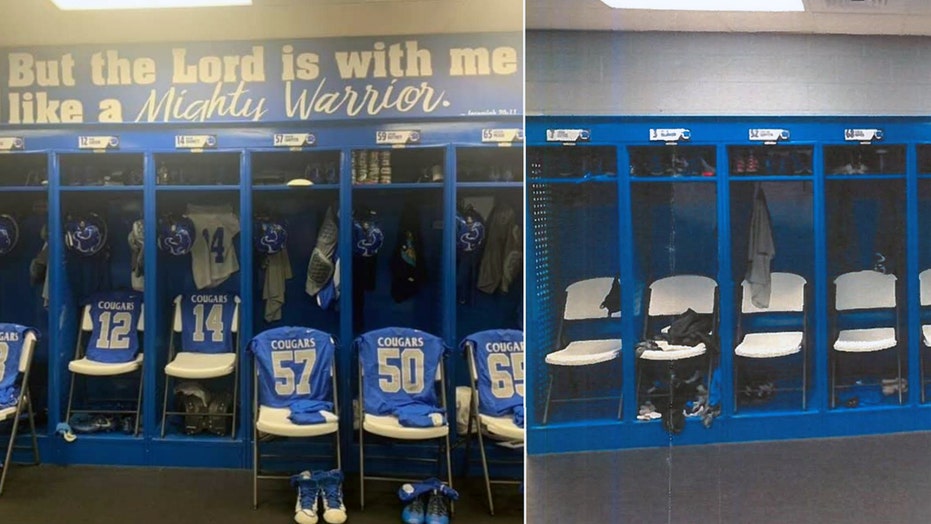 A public high school in Kentucky removed an inspirational Bible verse from the locker room after a "concerned area resident" complained.

The Freedom From Religion Foundation (FFRF) sent a letter to Letcher County Public Schools in Whitesburg, Ky., in November claiming the message above the lockers, along with two other religious messages at other schools in the district, "violates the Constitution" by displaying "religious symbols or messages."

Bold letters on the wall of the Letcher County Central High School athletic locker room said: "But the Lord is with me like a Mighty Warrior," with attribution to Jeremiah 20:11. But in February, school officials removed it.

Letcher Central High School in Whitesburg, Kentucky, painted over a locker room Bible verse after there was a complaint. (Freedom From Religion Foundation)

Also scrubbed was a bulletin board message displayed in Fleming Neon Middle School that said, "Jesus is my savior You can't scare me!" and a prayer for children on the Martha Jane Potter Elementary School's Facebook page at the beginning of the school year.

"Dear God, Thank you for the gift of education in every form. As our children prepare to start a new year may confidence be their foundation, may grace be their guide and may hope be their compass toward a bright future. I pray they would have eyes to see the needs of those around them and a heart to love well. May they face each day with positivity knowing that no matter what comes their way, they do not have to face it alone. Amen."

“The bulletin board has been replaced, the Facebook post has been removed, and the locker room has been repainted,” Superintendent Denise Yonts wrote in a February letter to the FFRF.

Yonts' actions were praised by the Wisconsin-based atheist group.

“We applaud the district for taking action to remedy this violation,” Annie Laurie Gaylor, FFRF co-president, said in a statement. “Students in our public schools are free to practice any religion they choose — or none at all.”

First Liberty Insitute, a religious freedom law firm that successfully defended the Bladensburg Peace Cross at the Supreme Court, said the district may have taken action too soon.

"It is unfortunate that the school took such a drastic step before fully vetting the complaint and doing a proper investigation of the background facts," Hiram Sasser, general counsel for First Liberty, told Fox News. "It may be the case that the school committed a First Amendment violation by erasing the messages, but until a full investigation is done, it’s impossible to know the correct legal course.”